Mint In Bloom - Or How To Survive Boiled Water 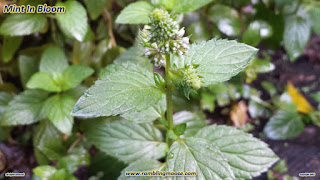 I remember taking a trip to Tijuana Mexico with a good friend, Tim, once.

After hearing horror stories about never drinking the water in Mexico for years, I went all weird and paranoid.  I have no idea whether the Agua Potable was really Potable but I didn't take a chance.

After driving down from Los Angeles in his Blazer, parking in a rather pretty neighborhood and walking to the downtown area, I needed something to drink.  Eventually I did what every traveler does, I found a bottle of soda and stopped fretting.

Finishing the bottle, my friend told me that the water was fine here in "TJ" and I shouldn't worry.  Then he drank a sip from a fountain in the Woolworths.

I think it was a Woolworths.  At least.

Just like I survived the boil water order.  Actually everyone was hammering me about not drinking the water despite the fact that we double filter the water that comes out of the refrigerator, blah blah blah.

But it gets boring drinking boiled water and so forth.

When I walked outside that morning for a romp with Mr Dog, Rack the Mc Nab SuperDog (TM), I spotted my crop of Mint.  The stuff is spilling over the pot and trying to attach itself to the garden where it will grow Borg Like and assimilate the yard, the island and all of South Florida.  For now, I keep it "reasonable" by growing it in one pot only and cutting great fist fulls of the stuff and boiling the heck out of it.

Oh sure, I could make mountains of Mojitos, Glaciers of Gelato, and Bazillions of Baked Goods, but I chose not to.

One goodly sized container of Mint Iced Tea, thank you very much.

But I noticed, the little thing had a flower on it.  It's getting ready to attack.  Actually, if my Botany serves me well, that's not strictly a Flower but an Inflorescence.  Assuming the inflorescence is only one seed per tiny blossom, it will put out a bazillion of seeds per head.

Oh sure, my garden will be a carpet of mint, but it will smell great.  Want something different?  Come on out back with an oil drum worth of boiling water.  Sure, it will look like we're storming the castle, but that will be what we need when the Mint Overlord takes over and swallows up my 2 bedroom 1 bath house here on my quirky little island.  The neighborhood will be carpeted by a pleasant scent of spearmint while people are swallowed up and little dogs no longer yap because the mint has grown over them.

Dining on a carpet of mint to keep the windows clear means that you will no longer need scented soaps and deodorant as the natural oils will leech out of your skin and you slowly turn green due to the chlorophyll that keeps you healthy and minty fresh.

Or I could just go out there with the scissors and snip!

Someone check in in a couple days.  If I'm missing, blame the mint.
Posted by Bill at 9:20 AM