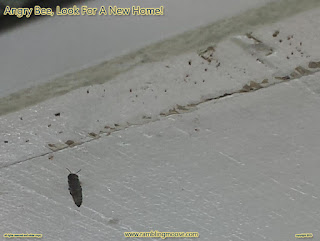 I have never liked Bees.

I can handle spiders, scorpions, snakes, lizards of many sorts.

But I just have never learned to like Bees.   I can respect them, and see their worth, but I don't want to be anywhere where Bees are.

So basically, I try to avoid them.

That is to say someone who is 6'4" and 225# and looks like your High School Football Coach runs screaming at the sight of a bee.

It's always been that way, and I suspect the only way it will change is when I can't run any more.

About 2 weeks ago, we did battle with the Mosquitoes.  The windows were removed, pretty much all at once, and the great outdoors came to visit.

Then the great swatting began.

At one point each of my arms was being bitten by a separate mosquito.  Then they died.

We have an apparatus that looks like a tennis racket where the strings are parallel wires.  Press a button and the wires are electrically charged.  Wave it through the air and any mosquitoes, and other smallish insects, that it comes in contact with are vaporized with a flash of blue white light and a satisfying "snap!".

One point we waved it and killed 21 in one pass.

The house was completely clear of mosquitoes yesterday for the first time in two weeks.

But that didn't stop the wildlife from starting to find ways into the house.

When they removed the front windows, about a month back, separate from the great Re-Windowing, they removed a metal track for the hurricane shutters.  Since I now have 5/16th inch thick impact glass on all of the new windows, they're overkill.

The tracks were held in place by some rather beefy wood screws sunk into the roofing joists.

Most of them were.  Some only went into the plywood that the ceiling is made out of.  You know, the stuff you paint white, then another color?

The bees found those holes and began to colonize the space.  I saw one of them fly into the hole.  Then exit, then back.  It was clearly building something up there.  There isn't much room since the space is stuffed with insulation.

They don't need much space.

But I didn't like that so I got brave.

I found the Instant Bug Death In A Can that has a long straw just so you can feed it into the opening.  Then I filled it with spray.

Immediately the bee came back, this time with a small fraction of magenta bougainvillea flower in its feet.

It knew something wasn't right because it came right back out and hovered around the opening.  Then it went back in and came out without the bougainvillea blossom.

I filled the rest of the cavity with more Bug Death, and went looking for caulk.

While that worker bee was out looking for more bougainvillea blossoms, I have plenty and she's welcome to those, I got to work.  Each of the holes were caulked solid with white rubbery goo.

Then the fun began.

The worker bee wasn't terribly bright, but she did know that she wanted back in the roof space.   For the better part of an hour it was hovering around the holes and trying to find a way in.

We went after it with the tennis racket but merely turned it into a game of badminton.

Finally, I decided we'd all had enough "fun" and went after the bug spray again and fogged the porch.  It left and didn't come back.

So the moral of the story?  If someone leaves a hole in your house, fill it immediately.  You don't want Bees Colonizing your house!
Posted by Bill at 9:38 AM