Going To Publix to Cage A Thunderstorm 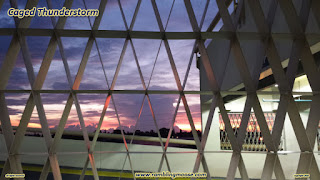 I have often said "Beauty happens everywhere, prepare yourself, and take a camera."

All it takes is to stop and smell the roses.

In my case, it was to stop and load the back of the car with the groceries.

You see we had just had a whole bunch of rainstorms.   That's a technical term "whole bunch".  We had a miss of a hurricane, then a couple days of storms.  All that gets followed by what passes for normal, which really is just a setting on the washer.

Since we, as a species, have decided to ignore what is happening around us, the weather got "weird".

South Florida at this time of year Back In The Old Days of the 80s and before, or so I have been told, had very regular weather in The Wet Season.  Rain at 4:30PM.  Clear for the drive home.

Then we managed to fill up the place with condos put too close to roads and homes that were once low slung and now are beginning to look strangely familiar to anyone who grew up in a colder climate.  You know, two stories or more.  Split Levels.  Frame houses.

Yeah, all of that will get knocked down the first time we have a proper Category 3 blow through like Matthew was supposed to be here.  Those houses will all end up in my swimming pool and like places.

If you are moving down here from Up North, buy an older house.  One floor.  Concrete Block.  Impact Glass.  Non-Flat roof made of Tile.  That's a start.  Let the other guy "take the hit".

We moved here after everyone filled the place up and took over from someone else who wandered off to the Florida Keys to build a house on stilts.  I guess he wanted to fish for Lion Fish off his back porch.

But the storms don't come at the same time since all those homes and all those pitched roofs and all that black asphalt warmed the air.   The sun hits it all, warms it up and creates a strong updraft.  It creates an island of heat that my own house is on the edge of.

So those 4:30 PM storms hit south of Miami and at the airport since the airport is a big open grassy field.  We get our storms at random times, seemingly around "The Dinner Hour" which certainly varies, or over night, or all day.

You get the picture... it all changed.

This particular day was one of those random days.   We got rain most of the afternoon and that meant that we were puttering.  I went into the kitchen and got creative and realized I needed a few things from the market.  Since it was raining, we went down to The Big Publix downtown in Fort Lauderdale since there is a parking garage built over top of the market.  Convenient and you don't have to park in another area code because you want to park in the shade.

Another Floridian trick:  You will park way "out there" so  you can put your car under a tree, then walk way back.  This is so your car doesn't melt in the sun.  Of course you get your suntan on the walk back from the shop, or the mall, or what have you.

The building is built like a bunker.  Thick walls to support all those SUVs and Exotic Cars that people here seem to think they need to show off to their neighbors with.  Plus my qualifies-for-antique-license-plates Jeep Wrangler.

Think of a casino.  No idea of what is happening around you, outside, day or night.  You can't tell if you are in the middle of a war in one of those bunkers of a buildings.

I was in Aisle 7, I think.  Giggling at the magazines.  Looking at the pictures and considering translating one of the Spanish Language ones just for practice.

We heard the weather then.  A Deep Rumble, and a far away wind.  Considering we were further inside that building than my entire property length, that was a surprise.

We rarely use umbrellas here.  Locals, that is.  You see someone using an umbrella and it is a snowbird or other tourist, or it is one of those rain storms that has no wind.

This wasn't that.  It was a gully washer out there.

We managed to finish the shopping and went up to load up the car.  I stopped dead in my tracks and looked West.  Weather almost always moves East to West here except the times it moves North to South or Up and Down.

Scratch that, you really can't tell what way a specific cell is Supposed To Move.  Thunderstorms can come from any direction at any time in October.

And there it was.  Looking Caged.  A thunderstorm.  I guess that was what I heard when I was reading that one Spanish magazine.

They do come from any direction and sometimes they just pose for you.

Finishing the shopping, we made it home without incident.  Just a little rain starting up just as we got into the driveway and loaded the food into the house.