Frog In The Shutter 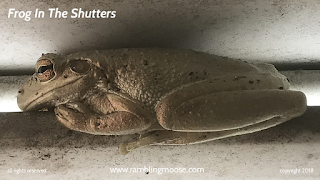 Once upon a time, there was a house.

The house had some truly awful windows.

They had to go.

They did go, but the problem was that in that weird construction, and all that complexity, there was a guest sheltering there at night.  My tree frogs.

When the windows were gone, they were evicted.

I hoped that they would come back, but they never did.

Tree frogs are gentle and harmless.  They will eat bugs and nasty bite-y creatures that you don't want living close to you.  These frogs are mainly quiet, and just hide near you asking nothing but a hiding place to sleep.

There was a single return the other day for two separate nights.

A much smaller tree frog than the previous ones perched itself in the shutter of my front bedroom.

We live much closer to wildlife here than we did up north, and that is quite fine.  I could do without the iguanas jumping into my swimming pool at dawn, and the ducks are a major nuisance these days.  If I ever have to mop duck droppings that were tracked into the house again, it will be too soon.  It's been a while since a gecko decided to try to hunt inside, and the patented Gecko Safe Removal Tool is going dusty.

But as for the frogs, well they don't come by that often.
Posted by Bill at 11:30 AM