Mushrooms and The Morning After Gordon 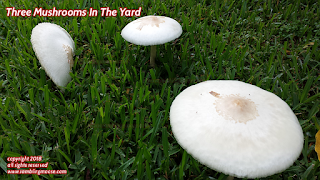 It was a noisy night.

It had been raining the day before, and well into the night.  The Radar here showed random clouds that had gathered themselves into something remotely resembling bands, Lines of Thunderstorms to non-Floridians.

This was the normal way a storm develops here.  Pop Up Thunderstorms generate over the warm water East of me, move their way over land, drop their water, then peter out.  Or they end up working their way across the state in one of a dozen directions.

These storms, though, had kept grabbing the heat of the water that was just off the coast and turned themselves into a storm of interest.  That grew into a Tropical Depression by morning.

Rack, the McNab SuperDog (TM) was unhappy.  He hates T Storms on a good day and this was well into the second good day.  I could hear him shivering in the dark.

Turning on the phone, launching a Radar program, I was able to see tell-tale banding and thought that this was going to turn into something that bears watching.

Yep.  By now this would be Tropical Storm Gordon, and did hit somewhere near the Mississippi and Alabama border on their Gulf Coasts as a strong Tropical Storm.

Here it was a minor nuisance.  Lots of rain.  The next day I found out it was 2.65 inches of rain.

All the South Floridians grumbling about their Labor Day holiday being a wash out, and so on. 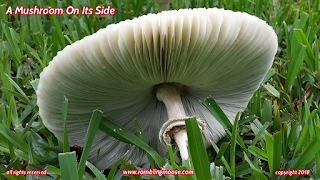 something that looked like it had landed in the yard, but could not tell.  Since it was raining so heavily, I'll wait for Sunrise before inspecting.

We went for our dog walk and a couple hours later I revisited the what was it in the yard.

It turned out to be four very large, six inch in diameter, palm sized white mushrooms.

I have lived here for more than 12 years now and I have never seen a Mushroom in the yard, let alone something this massive.  I guess it was always too hot, but with the cooler air due to the storms, and all that rain, it decided to send these fruiting bodies out and spread spores. 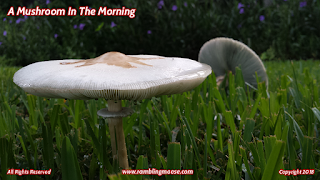 Weird.  It looked like a scene from Lost In Space where the Jupiter 2 had landed on the planet of the big grasses, and one of the other had ditched on its side.

If it were, there would be fire, people running around screaming, a monster that was a cat with things stuck on it or perhaps a giant 40 foot tall chimp looking thing that went "Bloop Bloop" coming off an attack space ship that was in reality a kitchen utensil.

My money is on a whisk.  If you hand a child a whisk and tell them to play, they're going to make it fly.  Trust me.

But there the mushrooms were.

Since they didn't bother anyone, I let them alone, and went inside.  It was raining again, and would all through the night and into the next morning at 4AM.

Luckily we slept through that.  In fact, we slept so well that I was lucky enough to see the 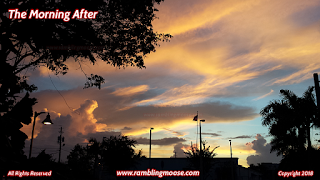 Sunrise.  The sun coming up over the Bahamas lighting the clouds below, turned them purple and mauve, later changing to some fiery reds and oranges.

It was so stunning a sunrise that along with my mushroom pictures and sunrise picture, many other people on social media showed off their own pictures there.

I mean, come on, how often does a space ship land in your back yard under your mango tree?
Posted by Bill at 10:02 AM