In Florida, If Car > Iguana, and Buzzard > Iguana, then Buzzard = Car? 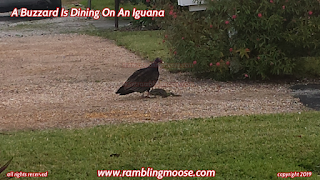 Welcome to Mutual of Florida Wild Kingdom where Native Species sometimes win out.

Once upon a time there was a pristine land where Puma roamed free and nary a hibiscus was found.

This was South Florida.

Then "we" moved in and changed things.

A few "swamp rats" of various kinds moved into the land that was dry enough to support us.

People.  We changed the place.

We have all put a heavy thumbprint on the land, no matter which group of people you are referring to.

Clearing the land to allow for homes of various ilk.  Then someone got the bright idea to drain the forests and the river of grass to create more land.

Sure, it worked but when the North emptied out into the place after the Second World War and the invention of practical air conditioning, we brought what we thought should be in this climate.

South Florida is an artificial landscape.

Those Palm Trees we plant everywhere don't belong.  Nor do the Hibiscus, the Orange Groves, and the Bottle Brush Trees.

Most of this stuff comes from Asia and Australia.

We also brought our animals.

There are roving packs of dogs and cats, of course.  Large amounts of Razorback and other feral hogs living in the forests.  There are flocks of parrots that visit from time to time that chatter at me and mine while I am out working on the swimming pool that does not belong, either.

Someone got the foolish idea that having an Iguana as a pet would be great until they started escaping.

These green dinosaurs run all over the place eating up the plants that we brought with us like they're candy.

You can't share with an iguana, don't even try it.  They won't leave your hibiscus or your orchids in peace, if they can get to them.

Every so often one of these creatures meets up with a car.  They run at full speed across the streets in front of my house looking for choice bits of plants.

Then you get to watch them as they move onto their next existence.

After they finish thrashing, they'll become food for whatever animal chooses to visit.

In the case of the last one, it was a buzzard.  It had just about a six foot wing span when it landed.  Or rather I should say when they landed because they're quite skittish.  Once one gets there, another tries to run it off so it can get to the choice pieces of Iguana before the other and they trade off.

Not a problem for me, I'm all for the Buzzards, after all they belong.  Green Iguanas do not belong in this ecosystem and anything that gets rid of them I'm all for that as well.

Even if it is a Ford or Goodyear and it ends up on my neighbor's driveway.

Fascinating to watch.  If you have to watch a dinosaur get eaten, may as well be on your neighbor's driveway!

I'd just rather not clean up after it all.
Posted by Bill at 9:25 AM