Years ago at this point, probably about a decade, we went off to a Bamboo Nursery. 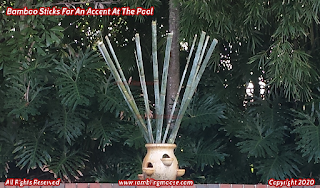 People in Asia love the stuff.  It's used heavily in construction, cuisine, art and so forth.  I figured I would have a ready supply of Bamboo to do oddball things with it.

But this particular bamboo we brought home from the nursery has quirks.

We planted it further back, but over the years, it's gone closer to the pool and readily drops nearly indestructible leaves into the pool.

As it matured, it has gotten thicker.  It started out smaller than my smallest finger, and was a clumping bamboo the size of a bucket.  Since we took the SUV to the Bamboo Nursery, we were able to stick the rootball in the back of the car, and have the greenery stick into the front of the cabin.

I remember riding back from Palm Beach County with my arm draped over top of it so the way home could be seen.

Now the thinner than my finger stalks have gotten thicker than my thumb, maybe two fingers wide.  It has gone from being a maximum of ten feet tall (3m) to growing taller than the highest supply lines on the electricity easement behind the house.  I'd say it's at least 30 feet (9M) and growing.

We noticed, then panicked since you are constantly looking over your shoulder in South Florida at the next hurricane season.  Those two stalks had to be cut down.

We did, and laying next to the pool I realized it was longer than the 32 foot (9m) length of the pool.  Even if my math here is being a little off, my estimates stand.

Since the stalks we cut were too nice to throw away, I cut them into roughly 6 foot tall, shoulder length bits.  One of them is a handy Me Sized length and I am taller than 6 foot by another four inches.  (193 cm in new money).

But what to do?

I had a strawberry pot that I wasn't doing much with other than collecting dust.

I Know, Let's Put Together One Of Those Accent Pots! 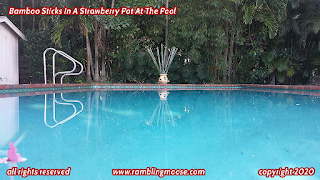 Basically it's the least I could do.  I cut them with the electric saw to roughly the same length and stuck them there, at the back of the pool.  I will water them as much as I watered the cactus, which is to say, Not At All.

The leftover bits are going to be chewed up by my parrot Oscar, and there are two little lengths that will be shot glasses once I sand them smooth.

Or maybe not.  At least they won't create a circuit-to-ground from the high voltage wires!
Posted by Bill at 10:23 AM