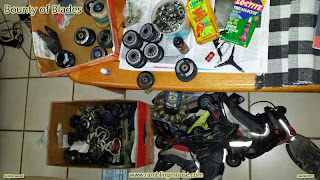 And here's my story.

Not to minimize other's challenges in life, but this should be easier.

I'm that guy.  I drive a 19 year old Jeep Wrangler.  I still have and use radios, some of them have tubes in them.

They may smell like old wood, but they really do sound much better than the internet feed I'm listening to at this moment.

That would be Valves for my friends Ol' Blighty.

Why is that?  Simple, I fix things.   Always have.  All the way down to soldering individual components on a printed circuit board.

I remember deeply annoying my father because before he had a chance to get his tape player fixed in the car, I did the repair for him.  It was just a thrown belt off the tape mechanism.

I could see him wind up to get loud and start a shouting match but "Hey, it works now, go play your tapes" was all I said.

Then I walked out and hid in the bedroom where I kept the shortwave radio and tuned in Radio Canada International.  9625 MHz.  They aren't there anymore.  Too bad, the news was always better there.

That era was where I got hooked on listening to the World Service Of The BBC and the time signal "pips" from the relay in Sackville, New Brunswick, Canada.

I know, I was weird.  Still am, now it's all in Spanish and I tell myself it helps my studies.

But all this equipment needs maintenance.

My car, My radios, and even my skates.

I just didn't think that having "Old Things That Need Maintenance" would include my workouts.

I consider that an easy morning at the park.

I have three pairs of skates that I trade off with.  Two are from the last century.  I always have a spare pair in the Jeep when I get to the park.  If the chafing is too bad from the hot spots, I can always stick a square of moleskin on the spot and go on, or if I 'Throw A Bolt" and lose a wheel, I can swap out the skates and get back on the trail.

That throwing bolts thing.  You see, that's why god made Lock Washers.  Oh, and Permatex Blue.  You have both of those things and your bolts won't fly off when you're on a corner, and at the speeds I do, falling is guaranteed to cause injury.  They just aren't standard issue on a pair of skates.

I had found some $5 Skates at a local thrift store, still in the box with the original information.  They weren't anything special but they were NEW.  With that new boot smell.  Tried once and tossed away.  My Good skates are from before 2003 and parts are dry rotting off of the boots.

So I snagged them, used my discounts, and eventually tried them out.

If you are one of the new people considering skating as a sport instead of just tootling around the neighborhood behind your children on the Cul De Sac in the suburbs, let me clue you in.

If your skates are less than $150, they are going to be junk.  If you don't have a truck (frame for the wheels) that is either Carbon Fiber or some sort of metal, there will be too much flex and you will hate them.

I knew these were ... ahem ... modest boots, but I had skated more than 10,000 miles on similar boots back in the first skating boom.  I had modded them with a Speed Kit and Heat Molding.

Heat Molding is applying a heat gun to a plastic part to make it soft and to use something that is not heat conducting to push that part into a better shape.  I used a bamboo stick I cut from my yard, and the boots are much more comfortable.

You don't do that without picking up some tricks.

In this case, you replace the bearings with some faster ones.  I have a couple of old cottage cheese containers crammed with bearings that have been cleaned, lubed, and certified for use.

Next, you replace the wheels with harder and larger wheels.  80 MM wheels, at least 80A hardness, but closer to 90A is better for speed.  Some folks ride on wheels that belong on the bottom of my wheely bin out front - 125 MM tall - Five Freakin' Inches tall!  On Inline Skates!  WOO HOO!  Speeeeeeed!  I CAN'T STOP!  (OOF!)

Now, bearings and wheels are upgraded.  What next?  What sick trick is Mr DIY going to do with this pair of (ahem) low end skates?

Speed Kit.  At least that is what we called them back in the first skate boom.

I have a different cottage cheese container with a bunch of speed kits.   Typically low end skates come with white plastic things that fit between the bearings to space out things and give rigidity.   Put them in the trash.

My cottage cheese container is stuffed with Aluminum Spacers.  To be fair, they're probably good enough for "you".

In my case, I need faster.   I need a pair with bolts.  They're screwed in place to minimize friction and stiffen them.   They are set up so that the wheels run free when spun for as long as you have a mind to lube the darn things up.

I had a bunch I scavenged off old skates and closed up skate stores over the years but as time goes on, you start losing parts.  Move 1200 miles south and you lose more.

I found I have 16 speed kits, but only 7 complete sets.   A Set is a spacer that is threaded, a pair of lock washers, and a pair of screws.

So this being a precision set up, turning a Leisure Activity into a proper Sport, of course I needed another speed kit, at least.

Should be easy to find those screws, right?

Apparently the two big box hardware stores, that everyone knows, decided that they don't have the demand to carry that specific screw to hold everything in place.

Lock washers we have!

But those bolts.  Have you ever considered how many different bolts there are?

Mr DIY has.  There are bolts with three kinds of methods to tighten them, more if you want to be really annoying.  Regular slotted screw heads are no good on a trail.  Phillips cross head screws can work but that means you take your skate tool with you for the eventual breakdown.   The original speed kit had two "1/4 inch, 28 thread, button head socket cap, 3/4 inch long".

Yeah I didn't think so.  Apparently it's only used in weird applications.  Different threads you see.  Like my soon to be upgraded cheap skate boots.

Went to Blue Big Box store #2.  Nada, although I really entertained the folks there when I rolled in on a pair of skates to the screws and bolts needed on my skates for more parts.  They were unnerved by me being over 7 feet tall in skates, helmet, pads and sweaty from the workout.   Sorry folks.

Finally went to the other old line hardware store with a different hardware guy.

I won't say success.  I ended up finding a screw with the right threads and length but it has a cross head Phillips in the top.  Everything else fits.

So if you are out on the trail in Pompano Beach and throw a bolt on your speed kit, I have a spare.

Even if the Sport is getting slowly more popular, it's doubtful you'll spot me fly past so I'll skate on happily.

You see, my own Pro Shop Standard is a minimum of 30 seconds worth of free rolling once you start.   I really want a minute.  I'll let you know how that all works out.
Posted by Bill at 11:06 AM