There's an old ethnic joke that I will clean up for you. 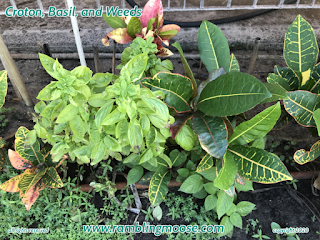 How do you know there is no ice in that country?

The little old lady with the recipe died.

Why the joke?  I tend to be that little old lady.  Other than being male, 6'4" and not really all that old aside, I have a habit of collecting odd helpful recipes and things that can be really helpful.

The garden picture shows it.   That is directly in front of my patio.  There mixed among the weeds and the Croton, I have some Basil.  Fresh basil is easy to grow, and unfortunately I am not the only one who likes it.  Mine got infested with mites.

The leaves on the basil that are curly and not "regular" are the ones where the mites were, and I didn't want to bomb the garden with persistent chemicals that would render the plants useless to use on the Pizza that I grow it for.

Insecticidal soap is apparently trivial to make.  It doesn't really have to be anything specific.  I use "Blue Dawn" dish detergent.  If you can use it to cut the grease on your dishes, you can use it on the food that goes onto the dishes.

Or under the leaves.

I have been using this recipe (below) for a while now, and it has reduced the number of mites, scale insect, and other nasties that want to eat my crop before I do. 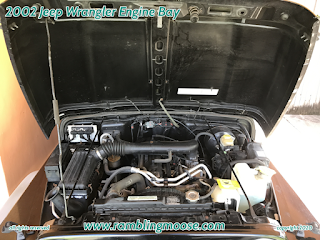 But why the engine picture?  I got a wild hair, and sprayed it all over the motor.   That motor is a 18 year old Jeep Wrangler 4.0 Liter inline 6 cylinder that was smelling like old motor oil when I would park it.  Since I did the last oil change myself and managed to get some of the oil on the surfaces, I also decided to do a very rare spray of that insecticidal soap solution.   Allowed it to sit for about five minutes, and it cut the grease in there quite well, if I do say so myself.

On the other hand, while I may be a little crazy to use the stuff that way, I won't do it often since I am concerned that that may be a bit too aggressive.

I really don't recommend it to be used for that, but it did work.

Use it on your engine at your own risk.  I will use it on my Basil for my own pizza.

Add the water to an empty and clean spray bottle.

Mix and use as needed.

Don't forget to rinse after application.  Nobody wants soapy vegetables and fruit.