Char Siu Pork in the Crockpot Express or Instant Pot

I was out for a walk and there was a Crockpot Express sitting in front of the apartments with the
"Free To A Good Home" sign on it. 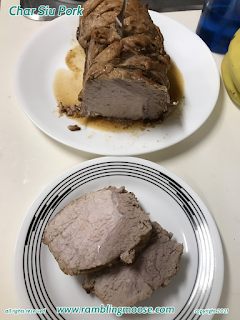 Yoink.  It had never been used.

So while sitting here thinking of what to write about, I realized I had some Pork Loin sitting in the refrigerator begging for attention.

That is what you are reading here.  It's a modification of the recipe I had written years ago.  You see, cooking in a CrockPot Express or Instant Pot is really simple.   It has to be wet.  The Spices can be assembled ahead of time.  It loves marinade.  And take the time to Brown or Saute the meat, the extra flavor is why it is worth it!

But it is really all about the time under pressure and how long you leave it for natural release after the cook time is done. 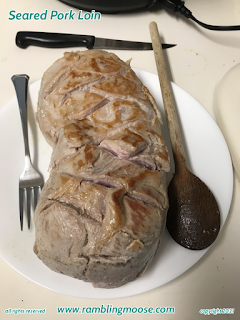 Sear your meat, fat side down until the fat looks cooked with a little oil.  I seared the outside of the entire piece of pork.

Remove the meat, pour in your liquid, and start the recipe.

Marinade  Add to a bowl, whisk until mixed.

Plus 2-4 pounds of Pork Shoulder or Pork Loin

Oh yeah that's the ticket!  The pork was tender, moist, and had a great flavor to it.  I reduced the sauce to a Barbecue Sauce/Catsup consistency after removing the pork and put some on the rice and pork I had for lunch.  It was good but was more spicy than I prefer.  Next time I do this, and I most certainly will, I will cut the hot sauce to 1 Tablespoon or less.

Again, since this was Char Siu (Chinese Barbecue) and not Pulled Pork, I served slices on a bed of rice.   If I were to want this to be Pulled Pork, I would increase the cook time to around 30 minutes for starters and see where it is for next time.  As it was this was an incredible meal for me and Rack the McNab SuperDog (TM)!