Did You Ever Wonder Why The Watch Maker Takes So Long?

The Man with a Clock has the time. 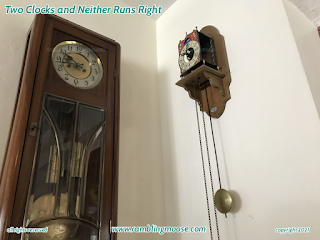 The Man with Two is never sure.

I have always had a thing for clocks and watches.

Not those quartz things.  They just don't have "a soul" to me.  Sure they are more accurate and don't need maintenance, except a battery every year, but there's just something missing.

I have too many clocks.  I just had to replace a quartz movement over the weekend, and it will be fine until next year.

I mean real clocks.  Mechanical Clocks.  I have a mechanical automatic diver's watch on my left wrist right now.  Seiko.  I wanted one of these since I was a toddler and learned what the difference was.

It turns out that that particular movement is something of a sought after item.  I'm afraid to have it worked on as a result.

One of the too many is this beast I have on the wall.  Yes it works, but no it is not in the best of shape.

You see, being a big bruiser, I've knocked into it,  The last time I went to wind it, I dropped the pendulum.  It fell to the floor and the weight went to the bottom of the metal strip that hangs it from the mechanism.

The clock itself has fallen from the wall.  The movement works and keeps time but it is insanely fiddly to set.

That is why I have respect for a clock maker's art.

The clock sits up and to the right of me at my computer, in the corner.

When it chimes at exactly on the hour, I check the time on the computer that sets itself to the same time standard as every other computer on the web.

Make a note of it.

Wait an hour.  Did you catch it?  No, wait another hour.

You were in the kitchen again?  Water running, didn't hear it?

How about the time you were in the shower?

Is someone making breakfast and dropped a frying pan?

Finally it's four hours later, and you catch it again.  The chime hit a second earlier.
So in four hours that clock is running a second fast.  Remember to run the pendulum a tiny bit "down".

And don't drop the pendulum again because if you do, it's start over.

So that is one of the projects that exist when you insist on doing things your own way and technology has moved on.

Oh!  And there is also Mom's Clock... that one hasn't been accurate in a couple years.