First the Lemon, Now the Orange, I Guess I'll Put The Comforter Away Until Next Time 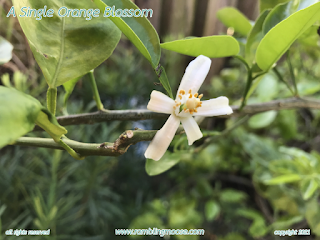 Last week I noticed that the Lemon Tree was shaking off the winter chill.  It's growing and is taller than I am in its pot.  It's also sprouting all sorts of little leaves.  I'm going to need to go out back and try to cut some Bamboo to stake the thing up.

While out there, I noticed that all the Mango Inflorescences have begun to form little bright green pea sized Mangoes.  There were flies and bees all over the thing pollenating the flowers, so I am hoping it will be a good year.  I have promised one person already that I would try to start some Mango trees for her.  I will probably have more than that one, especially if I am blessed with a lot of fruit.  The tree is even throwing out a lot of leaves so I know that once fruiting season is over in early summer, I'll be out there pretending I know what I am doing and trimming it back like a tree surgeon.

They don't really like that and will pout next year.

Now, I walk past my Orange tree.  It's a Honeybell Orange, which if you don't come down here to Florida you probably don't know.  It's my favorite kind of Orange, very similar in taste and texture to a Mineola Tangelo.  Soft, sweet, and floral, they have a lot of juice to give.

I planted it shortly after we moved into the house so I'd say it was there since 2008 or so.  It's in a bad house, next to the fence and the carport so it gets hotter than it prefers.  We routed the outflow from the air conditioning to it so it gets passively watered by "free water".  It had stopped flowering about two years later, and never really gives fruit let alone blossoms.

But there was a flower on it.  Popped open and smelling amazing.  Then I looked along the branches and there were dozens of blossoms waiting to open.

Yes, it will be a good fruiting season.

I used to marvel at the orange groves up in central Florida when I would ride through on the way here.  There are groves planted right up to the edge of the road right of way and you could literally pick fruit without much effort.

But the nicest thing about driving past a flowering orange grove is the intensity of that sweet smell that wafts off them.  I am getting that same smell here at the house.  I walked out to the tree and just took it all in.

Mind you, Honeybells are not supposed to have seeds, but if I do have one that puts out seeds, I'll plant them.

I'll let you know how that will go if they do.  I many not be able to harvest anything until next winter anyway, they have a season that is later in the year.