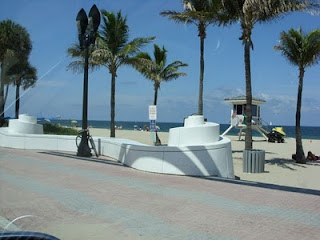 Tropical Storm Bonnie was a non event here in South Florida.  We've had normal thunderstorms that were more vigorous.

The beach is still here.  We haven't had any tar balls show up yet from BP's spill, people will be there enjoying the weather today since it is breezy and nice.  At least it will be once the sun comes up.  We aren't even getting into the 90s today, Fort Lauderdale is running a wee bit cooler than seasonable this year.

I picked up the loose and light objects and set them aside and under cover.  Hurricane Prep took an hour.

We have something else brewing off of Puerto Rico so we could still have some drama, but for now at least, I know where the shutters are and that if we have to, we can be safe.
Posted by Bill at 7:33 AM