Is Work Beginning on Wings and Things Again? 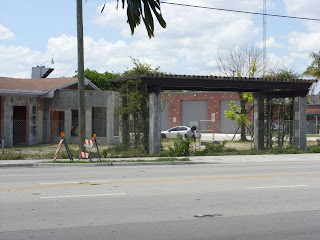 I do need to get out more, but one short walk to the Drive on Sunday yielded two rather interesting points.  At least they were interesting for me.

Yesterday I wrote about the stop light and the need for a readjustment of the timing on the thing.

Today is this picture.

Wings and Things was a restaurant that I never had a chance to try.  I'm a big fan of "Local Dive" restaurants and eating where the Truckers Eat, but Wings and Things looked far too chancy for me to try when I first moved here.   It looked like a place that was dying and looking for someone to stick a fork in it.

Ironic for a restaurant isn't it?

It was sold in the intervening time and was intended for redevelopment as an "Asian Fusion" or Thai restaurant.  They begun to work on the property that in a prior life was a Sunoco gas station, if I remember my local lore correctly.  If not, Diane Cline will certainly correct me... but you can still see the roof line in this picture.

They got as far as you see here and work stopped.  The new owner or long term lessee or what ever they were ran out of money and ended up in a country over in South Asia, Indonesia most likely, and that was a year ago.

We in the city were left with this wart on the nose of the central business district.  Probably at the midpoint of Wilton Drive, we had a stalled construction project.  This sort of nastiness won't happen again quite this way.  The Mayor and the Commission rightly passed a performance bond ordinance that says that if you're building a commercial structure or remodeling one of a certain size, you pay a bond that will be returned in case it fails.  That will be used to stabilize the structure and property so at least it won't be a hazard.  I doubt it will bring it past eye sore stage, but it is a good start.

It was so long ago that this started when the Google Streetview Car came through, it was still "under construction" as you see below.


This project predates and is probably the cause of the ordinance.

Fast forward to Sunday Afternoon.   In all this heat, I walked past the place and saw a landscaper working hard on the grounds.  He is visible in the (first) picture in a white shirt, and did a pretty good job with the sow's ear that this place has become.  The grass, weeds more like it, were trimmed short.  The trees that had grown up on the grounds were cut back so it didn't resemble the brambles of Blackberry Bush that I used to hide under as a Fort in The Swamp near my Jersey Childhood Home.

He wasn't alone.  He had help.  A rather large woman was hiding under the porch of that building looking very bored playing with her phone.  I don't know her story but she certainly didn't seem effective if she was being paid to be there on that Sunday.

At any rate, it still looks like a wart, but now it looks like someone trimmed the hairs out of it in an attempt to make it look more presentable.  Hopefully work will begin in earnest and we'll see that building finished off.   I've seen mock-ups of the original plans and would like to see that vision finished, or anything else for that matter!

Hopefully Wilton Manors will get that Wart removed!
Posted by Bill at 7:57 AM