You can wear out a Border Collie – When Monkeys Fly!

I got a box of random things from a company called www.woot.com last week.  Its a lottery, you pay $8 and you can get junk or a pallet full of things that make it worth while if you sell them on ebay.  I've gotten enough things worth while that I'm still in the black with them after 8 years of purchases.


My box was more junk than anything else.  Two calendars from 2010, two High School Musical Clocks, something else that I can't remember, and a plush toy.  I don't need toys, my house is stuffed with them, but this was something that a Border Collie would love.  It is a flying toy that looks like a monkey wearing a cape.  When you put your fingers in the two hands and pull back on the feet, the arms stretch out to three feet.  Let go and the rubber bands that are the arms will snap to allow the monkey to fly across the room.

When you launch the monkey, there's an electronic sound box that lets loose a shriek that is music to a dog's ears!  I have a shelter dog who was billed as a “Non Barky Dog”.   It was weeks before I heard her bark at anything other than other dogs, and in the house she's next to silent.   If I show her the toy, it sets her into spasms of doggy joy that is accompanied by a fusillade of barking that can only be eclipsed by Fireworks.

If she gets that toy, it's dead.  So far we have managed to hit the ceiling fan and not damage it, knock over some things on tables and chairs, and it is still safe.  She doesn't think it's hers yet so she's still doing that Instinctive Herding Behavior, but when she changes her mind, it won't last five minutes in her mouth. 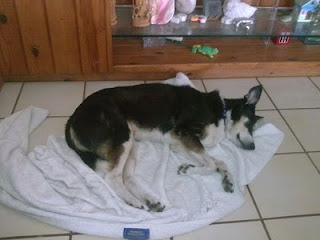 So that picture?  Last night I had played with the screaming monkey and Lettie was so overjoyed that when through she sat down completely tired out, hyper like a 3 year old on sugar, and fell asleep after whining at the toy that I had thoughtfully hung on the door just out of reach.