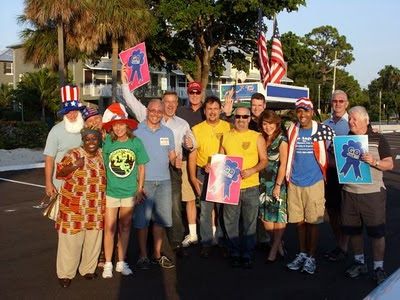 Don't disappoint Joe Angelo, Steve Zollo, as well as Celeste Ellich, Scott Newton, and Ted Galatis.
Go and vote for Progressive Candidates of every party.
If you don't everyone here will frown.


Being involved in the Volunteer effort here in Wilton Manors, I have heard many horror stories.  There is one particular throwaway paper here called the Island City News.   I have yet to read a story in there that I personally would consider unbiased, and that is of course my own opinion.  But the outright slanted stories and the lack of any sort of journalistic ethics (again, my own opinion) in that rag have not been missed by the Legitimate Media.

If you would like to see some of the back story yourself, this article was posted on the Broward New Times Website and it begins to tell the story why so many people want to see Gary Resnick out of office and Steve Kelley's so called newspaper does not belong in our city.
The Article is linked here.  From what I have seen, they are telling the basic story fairly well, and you can only imagine how much worse that paper is.  Its best use is lining my Parrot's Cage, but unfortunately it scares him so I just recycle it.
Again, it's only my opinion, and because we're talking about Resnick and Kelley I feel compelled to state the following:
This is my own personal opinion, I have not been paid by any political candidate.  I have not been paid for any writing on this blog to date.