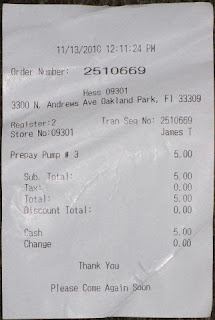 Right arm in the refrigerator, hand on the cold cuts that were to become my lunch, the phone rings.

"Hey its an emergency!"

Turns out that Mr Expert ran out of gas.

After having to hear lectures from someone who adopted my theory of automotive purchases and then how wonderful it was that HE thought of the idea of getting a Diesel powered Mercedes SUV for years, I was being asked to come to the rescue.

See, I'm a great fan of Diesel powered cars.  If I could I'd be driving one, but I won't be trading in the Jeep soon.   Diesel has the benefit of giving back on average between 1/3 and 1/2 better fuel consumption.  The price of Diesel tends to be about the same as premium gas.  Another 10% better.  Eventually you end up paying for the motor by having spent less on fuel.   If you have bad luck with your motors burning out because you forgot to change the oil for four years, they tend to be more sturdy and since they're burning oil and not something that can be used to remove paint they will not wear out as soon.   It is not unheard of to have a Diesel car run 500,000 miles.

But they do need their fuel.   This beast of a vehicle in question is a Mercedes-Benz ML300 CDI.  Seats 5 comfortably, will haul all sorts of things in its cavernous enclosure and typically gives you 25MPG in the city.  He gets 40 to the gallon on the highway in something that easily would be considered a large car by all but the most jaded of Excursion drivers.

He went up to Maitland Florida for a business meeting on Friday, and came back on Saturday.  I was getting regular calls all the while on his progress down the turnpike as he rode in comfort with the cruise control set at a safe but high speed.

To my surprise as I was getting my own lunch, I get this panicked call.  "Please Come and Rescue Me".

Ok sure, but they do need their fuel.

I went to the shed, chased the spiders and geckos off of the red plastic container, and went to the Hess Station on Andrews in Oakland Park.  They have Diesel there, and that is the biggest problem with using an efficient and quiet diesel vehicle - the availability of Diesel Fuel.  You just can't get the stuff at any station.  On the other hand you get quite used to driving a full month of normal distances without having to fill up.   You build a mental database of where the stations are, fill up when your little light comes on and all is well.   Some of the common vehicles like a Jetta TDI will get 40MPG city and 50 Highway no matter what the EPA tries to tell you.  The dance of acceleration and shifts can be learned without any hypermiling tricks and giant battery packs in the car, and still get amazing gas mileage.

I went into the little shop and was greeted by Jimmy who was working the place.  A real nice guy, very personable, he asked me where the car was broke down - the big red plastic can was a give away when I launched into this story.  After years of being told how great it was that HE thought of getting a Diesel and how getting 40MPG was so wonderful and so forth... he ran out of gas.  3 miles from home.   Jimmy was enjoying my rather energetic description and laughing with me at this kook who was standing by the road at Powerline and Prospect waiting.  Jimmy agreed, not the best place so I should fill the can with $5 of Hess' best diesel and be on my way.

See, they do need their fuel.

I did that and got back into the reliable old Jeep and gave the can to him when I got to the out of gas vehicle and told him just how much fun we were having at his expense.   Since this was the closest stop, and there was no charge plate on the diesel pump he would have to visit Jimmy so I suggested that when he gets to the Hess that he enjoy the camaraderie of being the focus of attention, even if was due to an admitted mistake.  He poured the $5 of Diesel into the tank, and I waited until he got the car started and moved on his way.

You see... well you get the picture don't you?

All day long I was asking Kevin " are you sure it's filled".  Not just the car, but the back of the car, the oven, the microwave, the shopping cart at Whole Foods, and the dishwasher.  It got to be a meme in the house yesterday.  If you see Kevin, ask him if he has any fuel in the tank.  He'll enjoy the joke.

You see the thing was as we later went to Whole Foods, the Whole Story came out.

As he was driving down the Turnpike, the light saying "Feed Me" came on.  He saw the light.  It usually comes on Yellow and then changed to Red according to him as it gets REALLY low.  Insisting that he could "Drive to Key West on Yellow" he usually waits for the Red.  Instead of getting the red light I think he was waiting for a different shade of red.  Maybe a little graphic of an angry German person shaking a beer stein at him to get some Diesel, Schnell!

Because, as you now know...