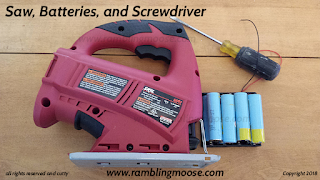 Let me start out with saying the lawyer words:

This is at your own risk.

The batteries I am using are Lithium Ion batteries scavenged from (one or more) laptops.  If you puncture, overheat, or otherwise damage one of these batteries it is possible that they may catch fire.

This is at your own risk.

The batteries were scavenged from laptops, and you can get 18650 batteries online that will be of full capacity.  I am using scavenged batteries because I had a couple old laptops that were going to be recycled.

From what I have learned, you can not charge these Lithium batteries in series.  Connected as a block, the batteries will overheat when charged and they may catch fire.  The circuitry in a laptop will charge the individual cells separately.

They are 3.7 VDC cells, which makes them attractive for this project.  The saw took 14.4 VDC which is four cells.  I had 4 2 cell blocks which gave me more amperage to push into the saw.

I get around all the warnings doing it this way because the cells can be removed, and charged individually in a charger made for 18650 Lithium Ion batteries.

Sarcasm aside, here's how I did it.

I had a Saw that was given to me as an oddball item.  No battery pack, No Charger.

I had all these batteries.

I ordered the battery holder (that black thing with the blue cells in them) for emergency purposes.

Connecting four batteries gives me 14.4 VDC so I was able to test the saw by connecting the terminals directly.  The motor worked.

Waiting for a reason to heat up the hot glue gun, I decided to do this one sunday morning.  It took me about an hour. 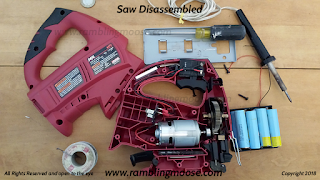 Remove all screws and set the mechanicals aside.  I was lucky that the parts did not fall out onto the table when I went to open the saw, and nothing was plastic welded together.

The placement of the new battery pack was by eyeball, and made sense to me.  Your placement will probably vary.  See my last picture for what I'm getting at. 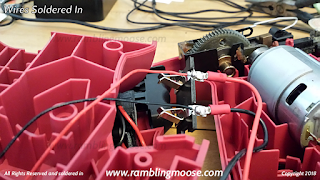 I realized I could thread the two wires from the battery pack through the air vents in the side of the saw without drilling holes.  Of course, if you are modifying a different tool, your placement will vary.

Using Hot Glue, I was able to attach the battery holder to the side of the saw and only covered up one of the multiple screw holes on the side.

When that was placed, then I could connect the block's wires to the Red, Positive connector to the Saw's Electronics with Solder.  Red-to-red - to keep the polarity of my connections correct.

I then did the same for the Black, Negative connection.  Again, Black-to-Black to keep the polarity of my connections correct.

I did a test to make sure that the wires were soldered to the connector block like in the picture above.  The motor groaned to life, the wires held, and I noted that the batteries needed a charge.

I then disconnected all of the batteries and wrangled the connector block back into place, seated the wires, and screwed the Saw back together. 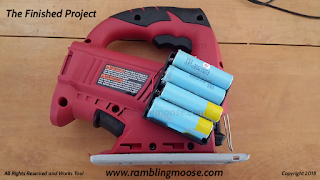 Once I seated the wires inside the saw back in their original channels, I could close the unit up back as normal.

After it was placed back together, I tested the saw once again and everything worked.

Step 4 Why I did it this way instead of getting a battery pack.

So yeah I could have thrown money at this saw.  The thing was that I knew that I would not need it much.  Having a lot of these batteries around, as well as the battery packs from last Hurricane Season, I knew that I could rig a lot of this sort of thing together.

I had a couple of other tools in the shed that I could have done this with, but the Saw was the only oddball that ran at 14.4VDC.  The other tools were powered by 18VDC and we had gotten a charger and a battery for them.

So my red saw being the only odd man out was going to get "hacked".

Safety would dictate not doing it this way, but I do have the batteries, and I did have a little better than basic knowledge of electronics being able to replace individual components on an electronic appliance.

"I do board level repairs" on electronics, when they are readily apparent as to what needs to be replaced.  This kind of a mod is trivial.

It rendered it "more safe" because the batteries are taken out of the unit and charged separately.

But ultimately this kind of thing is at your own risk since it is what a pharmaceutical would call an Off Label Use of the product.