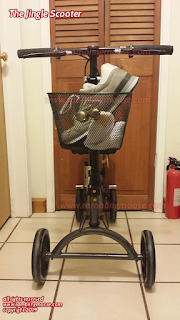 I came to the conclusion that I had to bell the cat.   Santa needed to be invited to town in September.

We all have our moments, but this maxim that I have was illustrated to me perfectly clearly, when I took a friend to a supermarket.

You see that friend broke his foot.  He's recovering from an emergency freak accident where the bone broke for no apparent reason.

Since he was in London, he got much better care than he would have gotten here in the US where even the doctors were amazed at the quality of care of the NHS.

I am thinking that had it happened in Philly, NYC, or LA he may have had a chance of a similar level of care, but at this point we'd be talking about selling his house to pay for it.

Thanks to the NHS (National Health Service) in the UK, he came home with a pair of shiny crutches, a cast on his leg, and a really fascinating collection of screws and stays to stabilize his bones.

We don't know why nor will we ever know why it happened.

One thing he did not get was a scooter.  NHS does not supply them nor did his US Insurance since Insurance is not here to serve you so much as to try to keep as much of your money as possible while giving you the absolute minimum of care.

However, he did not have to pay a dime on the NHS.  At. All.

I just may move to Vermont or Southern California when I truly retire so I can have a walk across the border for my future meds in Canada or Mexico, but that's a different story.

We have all seen these contraptions where you kneel on it and glide along to where you are going.

I'm afraid of that damn thing, he's faster than I am while walking.

But he is also just this side of silent on it.

Since as my maxim goes, Other People Don't Believe Society's Rules Apply To Them, I went along as Security.  Being as tall as I am, people may not notice him but they surely won't miss me and I can run interference.

As it was we both got crowded out of places we wanted to go.  My heart goes out to the wheelchair bound and the blind.  If we had trouble with all of this, I can only imagine what they go through.

So I had a brainstorm.  I belled the cat.

Not literally, don't get your animal rights in a twist.

I put a jingle bell on the front of his scooter.

While going through his paces, now you can tell he's coming.  He jingles.

Yes, I finally found a use for those over large jingle bells I found one holiday season and set aside.  It's September and I have no pressing need for a golf ball sized bell, let alone two.

Taking a small piece of Copper Wire, I tied the things to his basket.

Yes, they have baskets, that is where you put your crap when you get out of the easy chair and scoot to the kitchen to do dishes, get your snacks, or use El Baño to get rid of same snacks.

It was helpful.  When he went to his next appointment, the bells were cheerily announcing his presence at a subliminal level and he had an easier time of it.

Next time if it happens, I swear I'm going to a toy store and getting a squeaky horn and some tassels.  The horn will shock people awake from their phones.

The Tassels is just because.  May as well have a sense of humor with it.   The horn should be as outrageous a color as possible since if you're going to look silly, Own It!
Posted by Bill at 9:48 AM