The storm in South Florida was minimal. 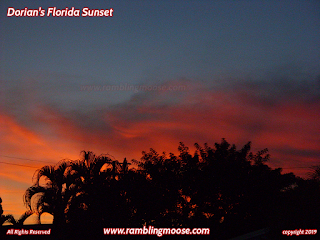 It did however ruin Grand Bahama.

I saw a before/after map of the island where about 1/2 of the place was underwater.  There were videos of utterly demolished places with a random wall standing and other videos of where people were standing knee deep on their second floor as flood waters were turning their couches into pool floaties.

Watching the coverage on Bahamian National TV at ZNSBahamas.com you could hear the desperation in the voices of the callers.

And this storm isn't finished.  It's heading for the Carolinas.  Finish your storm prep up there, don't wait.

Even though it is currently a Category 2 storm, it can still wreck your day.

These storms are a way for the environment to move excess heat from the ocean into the atmosphere.  The explanation I heard was that this mechanism was a partial reason why Dorian stalled out over Grand Bahama.  The heat of the Bahamian ocean got lifted into the upper atmosphere and got dumped into North Carolina and broke down the steering currents.

All this caused an upwelling of the cold water in the deeper parts of the ocean and slowly weakened the storm until it got a nudge from the environment and started it moving North again.

After two days.  Imagine a category 5 storm sitting on your house unleashing the hounds of hell for two solid days.

If you can't give to the Bahamas Red Cross or go there directly in a Flotilla like I heard my neighbors were going to do, consider shopping those companies that are supporting the efforts and let them know why you are.

For now, there are four storms in the Atlantic, one more in the Gulf.  The season does not end until December 1 so we can have this happen again in a week or two.
Posted by Bill at 9:52 AM