How Long Will They Stay, or, If It Doesn't Bring You Joy, Set It Free

Over the last few years there have been a bunch of articles. 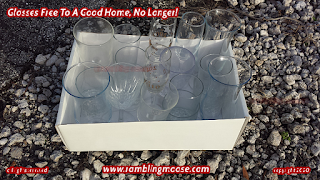 Actually quite a few articles, so I'll be lazy and not look for them.

One after another says that when the Boomer goes into the Home, the Millennial doesn't want "It".

"It" being "Brown Furniture".  It's also the Great Generation's China that the Boomer inherited as well as a long list of things that they can't be bothered with.

I've come to realize that those Millennials are making a whole lot of sense.

You see, last weekend we went to Ikea. You know the place?  Giant box of a store filled with right-sized food, furniture that you build yourself, and everything is named by throwing a dart at a Swedish Telephone Book?  I am rather fond of Ikea, and the clean lines on the furniture and the names and the possibility of getting some of those awesome cookies at the end is all part of the fun.

Besides being given a Poang Rocking Chair that I am enjoying very much, we got a China Cabinet.  I've been trained to call them a Tallboy, but that could just be my own warped version of English so pay me never mind.

It took all weekend to get the mother-lode of boxes into the house, opened, proofread, and then assembled.  The tallboy is taller than I am so it is truly tall.

To get this beast of a piece of white furniture where it is needed, we had to clear out the old cabinet of its glassware.

Now, Husvik the Tallboy, and Poang the Rocker live in my dining room.

This was where I realized the wisdom of the Millennial.

I was confronted with my glassware from when I was in my first apartment.  Some glasses leftover from when I was a child.  Some more glasses that I pulled out of the landscaping over the years.

Rather a lot of glassware.  In fact so much so that we began to pile it and all the Onesie-Twosie oddball glasses into a low box.

After considering how to get rid of all that strange one off and two off drink-ware, I merely moved the box out to the front of the property.

After all, how much of this stuff can you use at any given moment?   We have never had an actual party in this house, despite knowing that it was the party house on the block before my boring self moved in.

So how did it go?  The box is still out in front of the house.  I'm going to keep putting it out in the morning, and picking it up at night until it is gone or the next trash day happens.

So I waited.  The box went out there at 8 in the morning.  Mind you, I live on a street with a fair amount of foot traffic.  People walk from apartments and day rentals to the Shops and Restaurants here all day long.

Mid afternoon crash happened.  Not too happy about that Nod-Off but blood sugar and high metabolism will do that to an athlete.

Came home and the box was still there.

It turns out that in the first half hour of night, someone came by and moved my weird mismatched glasses on to their new home.

No more Crown Royal Old Fashioned Glasses.
No more Highball Glasses.
Gone is the cut glass goblet (singular, all the rest suffered deceleration trauma over the years).
Even the "extra" glass that came from a Bag Of Crap that once blinked from LEDs in the bottom of it.

Bye Bye!  With my blessings.

Now if I can just get rid of those plastic tubs of weird stuff in the back room... Hmmm.  Maybe a handful a day... I wonder if I can get away with that?
Posted by Bill at 9:50 AM