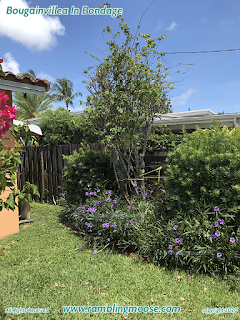 When you have a garden that you wish to conserve, you eventually have to make a decision.

The house here is old enough that the original plantings are now quite old.  I have a few prize plantings of Bougainvillea that predate my ownership by quite a few years, and I am assuming that they predate the 1980s.  The house is either built in the 1960s or 1950s, even the city does not know.

However, those Bougainvillea arbors have a few problems.  Being in the tropics, it means that eventually they get chewed up by some rather aggressive ants and termites.   The big black Carpenter Ants that are endemic to the Northeast have a distant cousin here.  Black with an amber translucent middle to them, they create a home in a hollow of a trunk and get protective of that spot.

Ask my one finger how protective that can be.

So through time, they move in, hollow out a cavity, and eventually cut off the circulation of nutrients to the rest of the plant.  When the plant is larger around at the base than my skater's beefy quadriceps muscle, and the inside of that same plant is hollowed to about as thick as an egg shell, I have to do a few things. 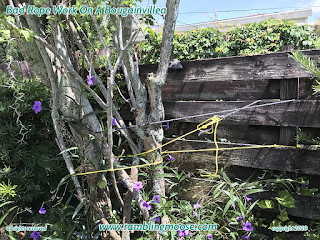 Being in Florida, and past the peak of the hurricane season, I could have ignored it and let mother nature take its course.   That arbor is lashed to the fence by ropes and zip ties as well as some sturdy anchor bolts.  But the rope is older than my own 14 years in the house by a long shot.

The last storms that came through snapped the cords and lashings.  The plant would have been on the ground instead of leaning against the roof. 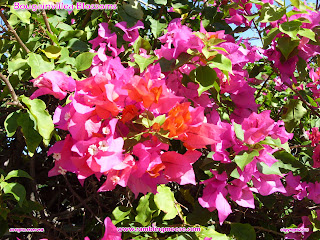 Every time I trim that plant, I save anything that looks like it has life in it and plunge it into a nursery pot hoping that it will root.  Also since the flower color is salmon and not magenta, you really want to match the cuttings.

Picture me, on a 93 degree day, (34c by my count) with a bamboo pole that is longer than I am tall braced against the house.  The plant was balanced on that pole so that I could wrap the thing with ugly yellow synthetic rope allowing it to remain in place until the next storm snaps my bindings again. 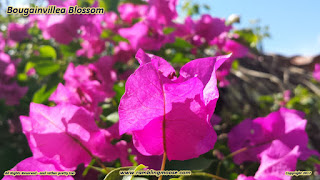 In the meantime, wish me luck.  I don't want to lose the plant, and regrowing from cuttings takes years.  Some of the cuttings are in place, others are started in those nursery pots.  I am thinking they will be perfect when the next owner takes over in 20 or 30 years.

For now, it is landscaping and gardening season, run amok.