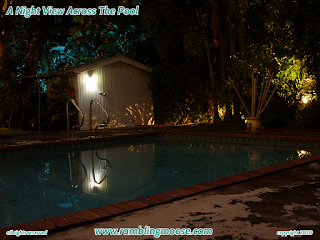 I had one of those days.  It seems to parallel what is going on in society to a basic level or maybe I am just putting too much into it.

On the other hand, as my Sister commented, I have always had boxes of parts for projects around and partially projects have a tendency to pile up until you get just that right part.

It was quiet here.  I was alone except the parrot and Rack the SuperDog (TM).

Being an early riser, I began to work through projects.

Our someone backed over a parking curb, some strips peeled off the bottom of his car, and he zipped out of The Shoppes looking confused.

Being creative, of course I grabbed them.  Taking them home to test, they ended up being serviceable strips of White LEDs.

Since then I have used them in a bunch of short term projects.   12 Volt LEDs are amazingly useful if you have "Low Voltage Lighting" around the property.

If you have parts laying around you can do an amazing amount of good.  The problem is that in Pandemic America, and indeed the world, you will find that parts are getting a bit difficult to come by.  The shipping channels are confused. 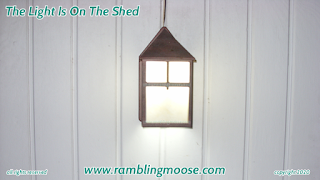 Noticing that my light by the shed was fading, and it would be easier for me to replace them, I pulled apart a rather interesting light fixture I had and repurposed the fixture to accept these LEDs.  They mated well to the fixture, and since it was proudly emblazoned with the Made In China motto, I expected mediocrity and indeed got it.

However my little shed in the back corner of the yard now has a rather nice light that is on the low voltage system, even if the Mediocre Chinese Light took my literal and figurative blood to complete the construction.

That repurposing took me two hours while the Barbecue Pork Loin cooked, 350F for about 1:15 or until internal temp was 150F plus 5 minutes rest.

While all this nonsense was going on, I was puttering around the house repairing things that I would not have attempted if I didn't have eyes following me around.

We all have help.  We all have "help".  It's up to you whether that is effective.

Going through all of that, and calling for appointments, and looking for other parts, I noticed I needed a few odd things to repair my skates.  Oh sure I could go out and buy new, but it's kind of a personal thing.  I enjoy keeping my skates rolling, up to a minute at a time for a test, but the parts are getting harder to find.

So I went online.  I needed Parts.

My one account has a list of "Things Bill Needs".  On there were three different pair of skates.  Since I have not been sponsored in skating since the early 2000s, a Patreon account is not yet in order,  and I went searching with the intent to price out gear, not to buy.

What is happening in the Inline Skating sport is that the weekend warriors are coming out of hiding, and Dad and Son have graduated to doing more.  Mom and Daughter are joining them too.  It's progressed from being "That Weird Thing They Did In The Nineties" to something so current that it is like the yeast shortage that we went through, or worse, toilet paper.

Maple Leaves are better than Poison Ivy for all purposes.  Just a hint.

One after another of those three pairs went off the Amazon list when they sold out.  Internationally, Inline Skates have become the Latest Hen's Teeth of 2020.

This is to say that unless you dig, you won't find any decent gear.  You see, most sporting goods require constant upkeep.  Gears need to be cleaned, wheels replaced, and plastic and padding degrades.

That last thing means that the plastic on the pair of skates you bought new in 2002 has shattered when you put your size 11 foot into them and you have resigned to tossing them out.

I had to rescue a couple of skaters as well as someone on a bicycle over the COVID Epidemic Summer.  I always carry a spare Allen Key or three, and just give them out since you will find them all over the place in parking lots.  It's also the same size that Ikea uses to build the Poang Chairs and others, but that's an aside.

One guy had a pair of skates throw a wheel, I rolled up, offered help, and gave him and his wife a key.  After they found all they needed to limp home, I got thinking.

If I am running through my gear, can I find more?

Actually, no.  Inline Skates are in white hot demand these days.  Not everyone knows which pieces of which items to save for future, ahem, cannibalization skills, so not everyone has jars of old skate bearings just waiting to be sent in for reuse, coach.

So if you find yourself in a quiet house, hot gluing things together, consider that the old wartime Britain motto of Make Do And Mend is a good thing to follow, because just like then, you may not be able to find replacement parts.

Just like my workouts, "It's A Marathon, Not A Sprint".  So be patient and cruise through the thrift stores once in a while.  You may find what you need.

Which reminds me... I wonder if they have some size 11 boots?