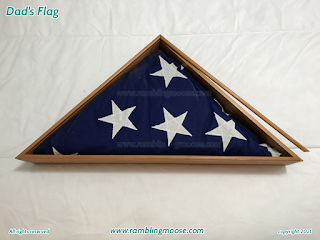 You know when you want to say something but are not quite sure how to say it?

Welcome to my world at the moment.

It isn't a case of mere writer's block but more of a how on earth do you phrase this.

Oh sure, I can blather away and it will get lost in the hive-noise of the internet.  A few people will see it and it will fade away.

But here's our story.

You see, Dad died back in the 70s.  He was interred at a veteran's cemetery near our home in New Jersey.  World War II, served in the South Pacific, fought at the Battle of Manila.  I grew up seeing some of those pictures of Manila that looked like it was bombed to see how bad the rubble bounced.

He only ever really spoke in broad generalities to me about that time.  That was his way.  I can see that it effected him deeply, but he carried those stories with him for his whole life.

When the funeral was over with, we came home with the ceremonial flag and it remained with us.  Mom passed later and she got the veteran's benefit of being interred in the same grave as Dad.  When we were told of this, I remember saying that she would like it that way.

I ended up with the flag and it came with me to South Florida.  I was given a rather nice triangular case as a present that I still proudly have.

Only problem is that the case in the picture now has no glass.   Today for the picture, I noticed everything was dusty and I took  it into the bathroom to clean it.  The triangular piece of glass slipped from the case and crashed on the floor into a bazillion pieces.  I have had that for at least 20 years now.  I will have to look for some glass for it at the hardware store.  Maybe some plastic instead.

One thing I never did was to fly that flag.  There was never a real reason to. It never felt right.

Mom's house did not have the flag pole.  It never felt right.  After all, We had Nixon, the original Watergate criminal, as well as the echos of Ford and the response in Carter.  Reagan was just as terrible as anyone else, if not worse with Iran-contra, and the complete mismanagement of domestic problems such as AIDS and the beginning of the deterioration of domestic infrastructure and industry that followed through Bush Sr.  Industry left the US because of policies caused by these incompetents.

Can't find a job?  Living in Mom's Basement? Blame them.  Elections have consequences.

Sanity reigned and we had Clinton and his booming economy and the surplus that he ended with, but that still did not seem like a good enough reason to fly that flag.  There was too much static on the horizon.

We then got the abysmal Bush Jr whose complete mismanagement of international affairs before 9/11 led to that particular tragedy.  After invasion and war, and 8 years of him came to an end unlike the war that is still going on.

With Obama we begun to get hope.  Things started to change for the better. However with the misinformation that was flowing into the country, things were also calcifying into two separate camps.

Then the Twice Impeached Trump.  I never thought I would see someone who the scholars would judge as the worst president since Nixon and Bush Jr combined, but here we are.  Worst President Ever is what I read over and over.

As I write this he still is not out of office.

So today, as of this publishing, at 12:01 PM we get Mr. Biden and Mrs. Harris inaugurated as president and vice president.

I will raise Dad's flag in honor of that.  I think he would have appreciated that.

While I have never met either person, I will say that people like me who rode the trains into Philadelphia have told many stories of how good a person Mr Biden is, and how he actually cared.  I've heard more than once that if you spoke to him of a problem, and he was able, you might get a knock on your door from someone from the government who was truly there to help.

I have only ever heard good stories of Kamala Harris since I have only ever visited California once.   Her words during the debates seemed intelligent and gave hope of a plan to get us out of the morass we are in.  So nice to hear an educated woman speak.

We need their help now.  It's a long way back but at 12:01 PM, I'll be celebrating and hoping for the best.

Good luck, we all need it.