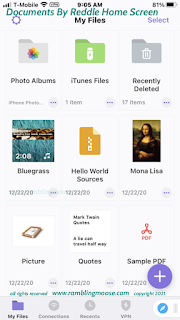 Let me get this out in the open, unlike any iPhone or unrooted Android...

They took a product called BSD, cut it down to suit, then locked it down so hard that if you truly know what you want to get done, you are hamstrung.

Over the years I have been given a bunch of "extra" iPhones as every year, Apple forces their sheep to Buy! New! Shiny! And! Not! Use! Old! Crap!

Did I say I use Linux?  Almost Always.   I have someone in the house who insists that I do my taxes on Turbo Tax, and that's the only time I ever boot a dusty Windows 8.1 computer.

I had to set up my latest iPhone, an iPhone 7 Plus.  Rather pretty hardware, I will say, but all that experience configuring the phone gave me some stiff requirements.

You have seen all of these if you follow my blog.

I require the phone to be open as another computer share on my network, and fully accessible to my user and others in the house.

Apple has locked me out of all of that.  The LineageOS I used on the S4 allowed that and the ability to block any ads with ad blockers in Firefox plus a hosts file that I could edit at will.

While iPhone won't let me block the ads with a hosts file, I did find a work around.

I needed a new work around because I had this nonsense working on the iPhone before but they broke compatibility with my software.  There's an active contempt in Apple's hive mind for anything not aligned with their view of how anything iOS is "supposed" to be used.

Step 1.
Solution: For ad blocking, install and use "DNSCloak".

It pushes all your traffic through a piece of software called a VPN that is configurable.  I can even import my hosts file from the computer I am using right now to write to you.  This is what I did and I almost never see an ad.  In fact, it is quite jarring when I do.

I did select "doh.tlarap.org" and I changed that easily plus enhance it with my own rules.

I require the ability to read from and write media to my network computers at will.  Apple says you can't do that because the Dead Black Turtlenecked God decreed utter simplicity.

(Ooh! Was that Thunder?)

What a crock.  Every app now needs a back button.  Some depend on your home button if it exists.  Others have a "Back" link at random places in their apps.  Lax standardization.  Really just freakin' give me a break!

If I ever get the chance, I will find his grave and poop on it.  My Phone, My Rules.  If there are any limitations I will remove them.  Linux says everything is a file.  I expect the same full access and I demand compliance.

Solution:  Install and use "Documents by Readdle".

What Documents gives you is a "file manager" to access your files (Pictures, Videos, Music, PDF, whatever).  You tell it to find the data. It imports it into iTunes.  You use your data however you want, it won't judge.

It is a trivial program to use.  Assuming you have your data somewhere it can reach, it's a matter of setting up the "Connections" to your data.  That can be on a local Windows SMB share, on iCloud, Dropbox, Google Drive, Box, One Drive, SharePoint, or Yandex Disk.

It makes connection, shows you what you have there, and allows you to import it or do whatever you want.   Play and Delete I am particularly fond of.

It saves me a heck of a lot of time doing surfs to Spotify/Soundcloud/etc and playing the music I want to play from the web.  I really don't want to launch Firefox to surf radio.garden to play some obscure to the US station in Port of Spain, Trinidad or Ensenada, Mexico to get some music to jam to when I get back on my inline skates.   Having my own content locally is so much easier, and I can park things anywhere I have access to.