Owl Be Seeing You Later! 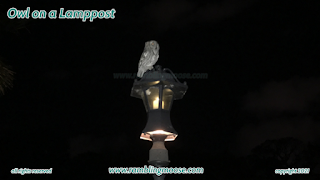 When I have a neighbor move in and start talking about things to watch out for here in South Florida, I usually tell them that "you live closer to wildlife here than in most places".

I'm in the tenth largest metropolis in Los Estados Unidenses.  It's 120 miles North to South, about 12-15 miles East to West.   Technically I'm on an island.  Actually a river splits to the West and this part of the city is bounded by water.

So we live in a very lush tropical forest and that means that it's prime habitat for Wildlife.

In fact, it really never got settled until the advent of affordable air conditioning, and I will say I have used the AC every single month of the year.  It never freezes here.  34F was as cold as I have seen it since I moved here in 2006.  One Degree Celsius.

I could probably grow Durian fruit if I really wanted a challenge.  I know they grow Cacao and Durian at Fairchild Gardens just south of Miami's downtown.  I have a neighbor who grows a coffee tree and roasted enough beans for about a cup.  I should find out how it turned out!

I've seen on my own property many kinds of frogs, snakes, butterflies, and canines.  Many more species of introduced animals which I have waxed poetic about before.  If I shine a flashlight down a corridor at night, those eyes looking back at me could easily be a raccoon or a coyote.

I don't know why I was surprised when I was texted a picture of an Owl.  I have only seen one once before.  This makes my second.  It's welcome.  During the day, it's perch is used by Blue Jays, Orioles, and Parrots.  It should find plenty of small rodents and lizards to dine on.

I really am surprised more that it allowed me to get close enough to take a series of four pictures with flash after someone had sent me his but here we are.