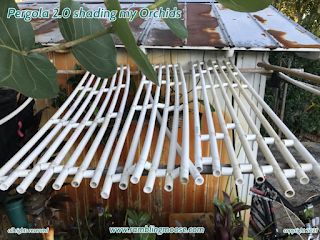 I guess we can call this Pergola 2.0 or Revenge of the Pergola.

I looked at the results of the first construction and did not really care for them.

Firstly, it used up the pipes way too quickly.

It also blocked the sun way too efficiently.

It was also way too heavy.  For the coverage that I was getting, it weighed too much.

So... lets look at this differently.  After all if I had the time and the interest, I could easily have made this out of Bamboo and Palm Leaves and had it be completely sustainable.  Since I had the plastic and it was all "trash", this fits perfectly with my own desire to Reduce, Reuse, and Recycle.

I had seen something manufactured commercially that was closer to what I was trying to achieve and I was right that I could re-create it.

Applying a little mental algebra, I could approximate the result I was trying for.

This whole project is one where everything was done off the top of my head.  The pipes were pre-cut to 5 feet, approximately, about 152 CM.  They were 1/2 inch inner dimension, about as thick as my thumb.  An inch thick outer dimension, or near enough to it.  Rough measurements were perfectly acceptable for this project. 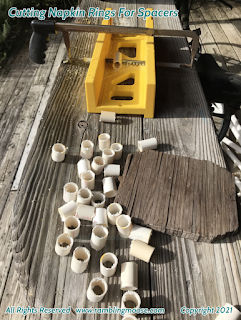 So to open this pergola up a bit, I could cut a number of "napkin rings" out of some scrap pipe and thread the plastic bottle rings through it.  Threading the plastic loops around the pipes, I would later blast the loops with a heat gun and melt them.  Melting the loops tightened the whole thing together and no glue or fasteners had to be used.  The bottle plastic is very heat shrinkable.  The PVC pipe plastic will get soft and bend if I need it to.

A Plastic Bottle being manufactured, is a lump of plastic that gets heated and compressed gas is blown into it.  This happens inside of a mold and the bottle forms to the shape inside.  Those bottles are generally quite small and thick before heated and molded.

The hardest part was cutting the "napkin rings" on a Miter Box, repeatedly.  Since I don't have any clamps here to hold it down, the length was never exactly the same twice, and I was happy with an approximately 1 inch (or one thumb) wide ring. 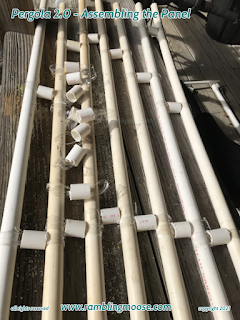 I kept with the original plan and weaved all the rings and loops together.  Once I had everything about the way I wanted it, I added another row of rings and loops just because I didn't like the looks of it.  It does not have to support a lot of weight, just enough to be stable in the breezes.

I blasted it all with the heat gun, holding the pipes in place as the loops cooled and then flipped things over.  Blast it again on the other side and it became one semi-rigid piece.

This will get attached to a frame later, maybe with more water bottle loops of plastic or more likely zip-tied to it.  Since I had a frame already in place, and at this point we are in winter, I simply placed it on top of everything and here you have the result.