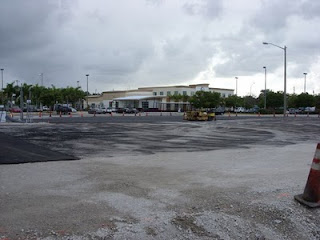 A Month later, it's gone and now we have a parking lot taking shape.

They tore down the old City Hall, recycled what they could and carted away the rest.

Over the last week there has been constant daytime activity on the old City Hall footprint.  The plans are being followed to create a temporary parking lot at the site.

There was a significant amount of grading and leveling that took place over the last few days, and the site was built up to what you see here.  The entire site seems graded and sloped toward the New City Hall and eventually the Middle River just south of the site.  There is drainage, or what appears to be some drainage roughly where the equipment sits mid frame, but I suspect that in the wet season we're going to be depending on the soil being very porous and a lot of percolation taking place.  Hopefully, runoff on the site won't be too destructive.

They aren't quite finished building the lot.  There's a couple more layers of Asphalt to be put down, as you can see with the layers we have as of this picture.  First pack everything down, then more to level it off.   Layer a couple levels of black top down and hope for the best.  I didn't see what they did with the basement level of Old City Hall but I do hope that it was filled solidly and can take the strain.

This lot is expected to last us about 3 years and hopefully will hold on longer than that if we need it.
Posted by Bill at 8:00 AM