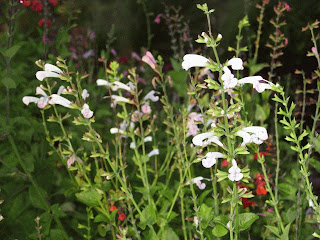 The other day I was walking through the neighborhood with Mrs Dog and these caught my eye.

I guess its a "Stop and Smell the Roses" moment here, except they aren't roses and I can't smell all that well - never could being the kid who grew out of his asthma at age 23.

In the middle of the small park near my house, there's a plinth.  The park is a preserve, semi-natural slice of Old Florida Native Flowers and trees.  These are most likely Natives since I know M.E. DePalma well enough to know that she just would NOT have invasives in that little park.

From my height, they didn't look all that showy, but for some reason I did something different.  I got close and took a second look.   Close up, as you can see in the picture, they're quite pretty.  Tiny little things in comparison to the flowers that many people grow here, the blooms were smaller than your pinky finger nail, so it really does prove that if you stop and take notice you can find beauty everywhere.

I've always been a fan of parks.  Coming from Philadelphia, I had access to the nation's largest municipal park in Fairmount Park.  It was within 3 blocks of the house and I was there almost every week at least once.  The manicured sections were where I skated, but when you stepped back you got to wonder if this was what it looked like before someone put their hand on this land and guided it to its present form.

One day I walked off the trail in the middle of a workout and headed toward a thicket and thought how naturally beautiful this little tree with the undercover was.  I thought it was all native and beautiful, then I realized that it was a Golden Delicious Apple Tree right in the middle of the park.