The End of Summer - Picture 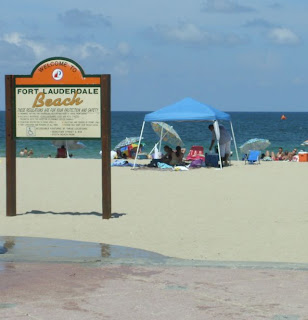 Labor Day is the traditional end of summer.

I was in Provincetown, MA one year and heard a local talk about how when Labor Day hits, it is like a light switch.  At least in that little part of the world, the weather gets markedly cooler and you really know that summer has ended.  He was right, it was noticeably colder by the end of that week.

This morning, the day after Labor Day, I was out walking the dog and it felt cool.   Cool is a relative term, I'm fully acclimated to Florida Temperatures so 70 is cold and I'm in a leather jacket.  The little pop up on my browser just told me it is 81 outside at 7:40 in the morning.  The forecast shows no temperatures in the 90s for the week.

We aren't technically speaking "Tropical".  That starts at the Tropic of Cancer, 20 miles North of Havana, Cuba.

On the other hand, it has never frozen in Fort Lauderdale this close to the beach that I can tell.  The records bear that out.  It did make it down to 34F/1C last winter and the town above us, Oakland Park, had snow flurries last year.  Once.  For about 5 minutes.

You snowbirds will start looking at the calendar and planning your February getaways soon.  Things have the feeling of "Season is Approaching".  The bars and clubs are busier, there's more traffic.  I saw my first Canadian license plate the other day.  They can't drive down here worth a whit, but at least they're polite about it.  Some of the other snowbirds, not so much.

For now, the rains are here, still.  It rained most of the evening hours here and into the night.  That implies that it is cooling, since lately it has been too hot to rain during the day.  The rains stayed off the beach and to the west, over the turnpike.  This morning as the sun came up, it had to come up further in order to be seen because there were so many clouds left over.  Giant spires of cotton candy, back lit with shades of gold and silver, lit inside with the crackle of millions of volts of lightning.

No rain yet this morning, but the day is still young.

That lightning is why you tend not to see Floridians with umbrellas.  If we carry them it is rain, not thunder.  For the most part a storm down here is a half hour.  When it rains all day, it is a rare thing, but it did rain "all night".  My pool is full and that is a very good thing.

The rains flushed out the toads and the walk was full of the sounds of frogs and birds singing.  An early morning parrot stood on the wire near the house and insisted on chattering at me, which is a better conversation than I had in a while.  After all, drunk snowbirds are entertaining in a different way.  Wildlife is to be cherished in all its beauty.
Posted by Bill at 7:54 AM