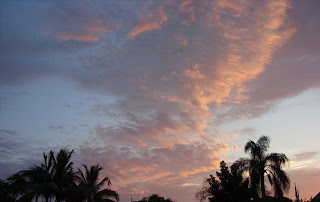 Beauty can be found anywhere.

At the same time, Beauty can be ephemeral.  You can find it anywhere, but not anywhen.

In this case it was from the mailbox in front of my house.  Obviously you're not going to get quite this view every day, and you won't get it in the middle of the afternoon.

The sunrise yesterday was particularly colorful.  There were just the right amount of clouds, the sun was at the right angle, and I was able to use my dusty old mailbox as a tripod to grab this shot.  When I looked at it this morning, I cropped out the houses that were at the bottom of the frame and called it done.

I guess it is the benefit of getting up at the crack of insane o'clock.  Few people are out and those who are out and about are not looking to get in your way.  They are normally dog walkers like myself or they're coming home from a night of revelling.  The folks who are heading to work at that hour are in their cars rushing about so you won't see them outside of a close brush with death as they fly by 15 MPH over the speed limit talking on their cell phones or worse, texting somebody about something that is immaterial.

There are times that are better to take pictures.  Typically it is within an hour or two of sunrise or sunset.  The colors are muted, you get more golds in your pictures.  The name for that time is the Golden Hour, so I have been told.  If you are going to take pictures of scenery, it is an alternative since there are some scenes, like at the beach that are not going to shine.  Beach scenes tend to be monochrome - the blue of the sky and the water, the sliver of silver that is the sand.  Crowds are the interest there, unless you're shooting the sunrise or sunset.  At sunrise, the beaches shimmer with copper, gold, and other colors that are missing when the snowbirds are out and about.

I have plenty of beach shots, and would like to get some more.  In order to do that, you have to deal with the crowds and crush of people, leave the car and rub shoulders with the salty masses.

On the other hand, even in a place of starkness, there is beauty.  People take pictures of the desert dunes that are amazing and otherworldly to me as are that of the Arctic winter scenes where everything looks like a painting made with one color.  Here it is a riot of color, a sensory overload of flowers, a shock of wildlife that you generally won't see elsewhere, even in the temperate Northern woods.