The Coldest Day and the Beach 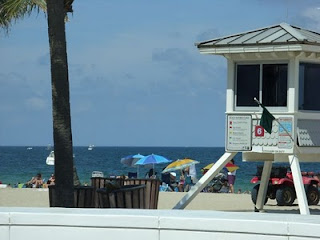 While the North shivers in their cold, we shiver in ours.  So I thought I'd show you a picture of the beach today.

You could go down there around mid day and it would look pretty much like this although I doubt very many people would be out under an umbrella.  It won't hit 70 today, in fact it won't for a couple more days and today and tonight will be the coldest day we've had since last winter.

I used to chuckle at my Floridian godmother's description of how bone chilling weather could be when the high didn't crack 70 and it was all the way down to 40.  Now I understand it.  After living here for four years, my blood has thinned to water and I just can't see going outside if it is below 60 unless I have on a coat that would have taken me down to around freezing when I lived up there.

If the iguanas had returned, and they haven't to my neighborhood thankfully, they'd be falling from the trees like the mangoes in season.  Instead the neighbors out walking the dogs in the 6AM 40 degree cold were wrapped up like hand grenades inside of fur lined parkas and complaining.  Just like I was.

So if you're up North laughing at me, it is all relative.   I was laughed at by some guy in a T shirt last night as I walked past the shoppes.  He was from North Dakota and told me that yesterday's weather (High of 70, low of 55) can happen in mid summer while here it is fully winter.

Then again I don't want to live in a place where soap bubbles freeze outdoors.  If you're up there and your thermometer says it is below freezing, you can try it - blowing soap bubbles outdoors.  They freeze solid and shatter when they hit the ground.  I used to do it all the time in a snow storm.  Sure, it looked "eccentric" but it was fascinating to see a soap bubble shatter and look like an empty egg shell on the pavement.

There you go... Palm Trees and frozen soap bubbles do not mix.
Posted by Bill at 7:52 AM