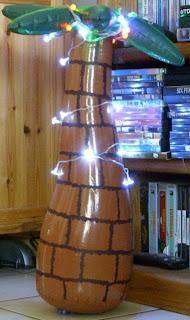 Lolcats lingo aside, I got an inflatable palm tree in a Bag of Random Crap from Woot a while back.

This ugly thing has been sitting around for a couple months now, since September.  I finally decided that I knew what to do with it.

After yesterday's posting about the Xmas Palms on Wilton Drive, and how nice a job they did in setting it up, I thought I'd show you what you get when you have it all in miniature.  This would be the opposite of that display.

I went out to the laundry room where I kept this thing and weighed it down with water in the base.  Thinking it might be tall enough for the holiday, I inflated it.  What do you expect in a bag of Random Crap?  Crappy Xmas Palms!

The lights were another crappy find I had.  There's this dumpster that is near the house and I found the two strings of LED Battery Operated Christmas lights in it.  Since they were LEDs I kept them around because they will run forever on battery.  Batteries are a wasteful thing to run Xmas Lights on, but I've been running them for about two weeks now on leftovers.  The leftovers were pre-used in my camera.  The camera only goes so far and "used" batteries are all over the house powering these lights, portable radios and other odds and ends.  Much better than tossing the things.

So there you have it.  The lights are finally starting to fade after about 20 or so hours of use, the tree is kind of cute sitting there next to the DVDs for the holidays.  After the holidays... we'll see what we'll do with it.  Most likely it will get stored for another year since the dog hasn't been convinced that it is Canine Indoor Plumbing.
Posted by Bill at 8:00 AM