5AM Border Collie Weigh In

After the drama of the stroke and the recovery my Border Collie Lettie is still showing me that she's thinking. 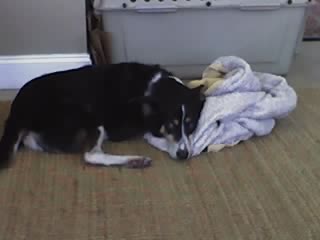 This morning, I woke up at 5AM.  I've been getting to be a light sleeper as time goes on, and the years of my racing on inline skates in Philadelphia, I grew used to getting up early.  I normally get up at 6AM regardless of whether I need to or not.  5AM would be a nature call or some bird in the bougainvillea outside the bedroom window greeting the dawn a little early.

Today there was no reason.

After a little time of laying there thinking about the clock ticking in the living room, the air conditioning compressor kicking on and off, I realized that going back to sleep for the next 45 minutes just made no sense.  I rolled over and grabbed my socks from the floor.

Meanwhile Lettie was running a marathon in her sleep.   I wonder if dogs get any aerobic activity from all that sleep-running?

I didn't think so either.

I was able to get my socks on and into the bathroom before Lettie woke up.  Yes, her hearing is starting to go.  She's getting "Selectively Deaf".  I can call her and get ignored, but having her in the kitchen watching over me while I cook proves that it is only "Selective".  You see the other day, she was in there next to the refrigerator watching over us when the refrigerator disgorged another block of ice cubes into the tray.

Lettie wagged her tail at the refrigerator.

Pavlov, I have another dog for you to test...

The other explanation is that the Thinking Dog listened to what you were saying, understood it, and decided you really didn't need her help on all of this so you can go do it yourself.   Or something like that...

After leaving the bathroom, I was confronted with a happy Border Collie wagging her tail and following me back into the bedroom.  Both of us were somewhat sleepy but I think she was more awake than I was.

Being "typical" I have an order I do things.  Every morning, I do certain things at certain times, and they're all in certain order.   People are creatures of habit and I'm not any different from anyone else.

Walking into the bedroom, the next thing on the list would be to step on the scale I have in the corner.  I watch my weight.  It's been stable, but slowly inching upwards with all the civic events that I'm a part of here.  After all, an extra 100 calories a day for a month and you're magically a pound heavier.

I've managed to lose 6 pounds without any real effort, so I want to watch the progress.

On the other hand, Lettie was watching it too.   Since she was in the room first she was wagging her tail and wanted to get a little attention, or be creative and entertaining, or any other order of the day.  Border Collies being incredibly intelligent also have a sense of humor.   Her stuffed cat is now on top of the coffee table and one of the many stray tennis balls that are in the house is next to her as she rests on her mat - that she has moved in front of my bouncy poang chair as if to say, it's mine now.

So before I could get onto the scale, Lettie stepped onto it and looked up at me as if to say "does this fur make me look fat?".

We got used to weighing her during the stroke and she had lost 5 pounds, recovering 4 of them and is where she should be.

I guess we all should watch our weight, even our Best Friends.
Posted by Bill at 9:05 AM