A View From The Bridge - Picture 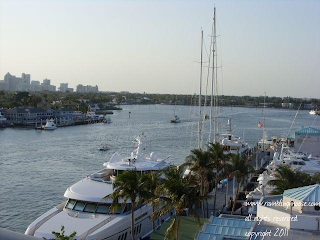 When a bridge opening is inevitable...

relax and enjoy it.

We were heading to Kevin's office to do some partition moves.  I was supposed to be the muscle, which can be ironic, and had just come off of the Fort Lauderdale Beach and A1A.

Heading up the bridge, simultaneously, we both said "Oh CRAP!" as we saw the lights begin to flash.  We were the first car on the bridge to be stopped.

So instead of cursing the bridge for opening, I decided to get out of the car.

Saying "I can be a tourist too", I walked over to the edge of the bridge.   Since the railing is in the way, I had to stand up against it, stretch my arms up high, and then tilt the camera just so.   As you can see in the original, it looks like the world is going down hill to the right. 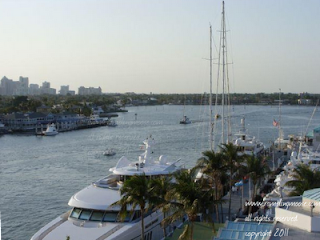 Laughing at myself, I decided to see how well I could fix the picture.   If you look closely at the mast on the left center, you'll see some pixelation of the long mast.  The other thing is I didn't know that Fort Lauderdale had leaning office buildings.

*sigh* well you just can't fix them all in photoshop can you?

At any rate, the intracoastal is a pretty place to take shots, especially if you have a level place to park a tripod.
Posted by Bill at 10:40 AM