Rack Was Attacked By A Pitbull

I will quote myself  here: "Stereotypes are Sometimes Correct.".

Not every pit bull is a vicious dog, but when they are vicious, they are far too "good" at it.

Florida passed a law banning "Breed Specific Bans" in the state.  If you asked me last night when I was knocked off my feet while on the ground kicking the side of this more than 60 pound pit bull to get her off my dog, I would say it was a bad idea.

Logically I know that pit bulls aren't all bad.   My neighbor had a pit, Babygirl, who was the definition of sweet.  He now has a part-pit Ellie that is Rack's best friend.

The problem isn't the breed, it's the owner.  In this case an owner that did not think that his pit bull had any problems with any other dogs and allowed her off her leash.

My neighbor's part-pit part Heinz 57 dog, Ellie, knew this dog was trouble.   We all met in front of the house the night before.   While Rack was being his usual goofy puppy self, Ellie was doing a much better job of reading this dog's mind.  It decided to pick on the weakest dog of the three in her mind, and started a fight.  I managed to pull Rack out of the middle and Ellie got yanked out as well.

From that point on it became a Dog Of Interest, or One To Avoid.

Last evening's walk I didn't have that option.  This pit bull was off leash in front of the property where the owner rents.  It spotted us before I did, at least 50 feet if not 75 away.

Rack saw it first and began to back up to hide behind me.

When I saw the dog, I grabbed Rack to lift him as high as possible to buy time.   It didn't work.

The pit bull charged me landing on me and knocking me to the ground.  At the same moment it grabbed onto Rack's front leg skin and would not let go.  This was when I tried my best to stop this by kicking the dog off of both of us.

The owner comes and finally collects his vicious pitbull.

He's trying to tell me that the dog is not vicious.  He also told me not to call the police.

My response was "If it wasn't vicious, it wouldn't have attacked us".

He of course said "If you are going to be crazy like that, I am not going to help you".

I then immediately called 911 and got through to the Wilton Manors Police Dispatch desk.

What had to have been the entire police force on duty arrived in under five minutes.

I rehashed the story to the officers who arrived plus Dave in Code Enforcement.

While you may not have Breed Specific Bans in place, we do have a very good law in town about vicious animals.   Whoever formulated this law has my gratitude.

I will paraphrase the legislation:

If your dog attacks a human or domestic animal (dogs and cats) and draws blood, causes a laceration or cut, or any other sort of trauma, your dog is defined as being vicious.  Vicious dogs are only allowed in the city limits of Wilton Manors if they are registered with the City Clerk and a bond of $500,000 is posted.  All of this must happen in five business days.  The dog will be retained by the city and sent to the county animal control to make sure that all shots and licenses are up to date at the cost of the owner.   If this bond is posted, the dog may not be allowed off property without muzzle and other protection for the safety and the good of the people and dogs in town.

Since the person who owned this vicious pitbull is a renter and had moved in within the month, I sincerely doubt this will happen.   Most likely the owner is a flight risk, will abandon the dog, and move out of town.  With an absentee owner in Maryland, and the property managed locally, I doubt that he will be allowed to remain in the property.  I think it's fairly obvious that the dog will be and should be put down. 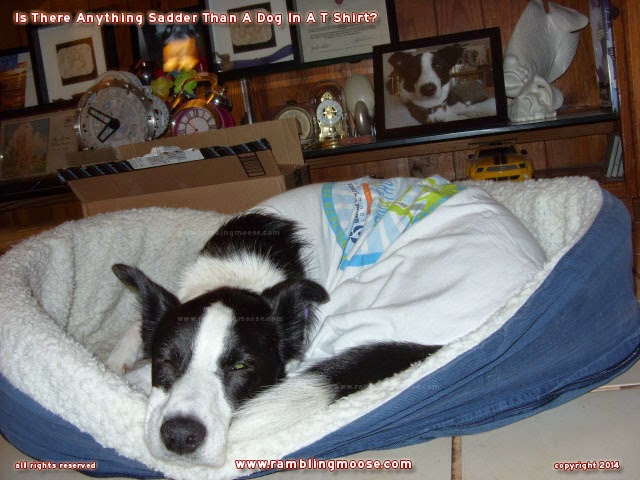 I was told by the officers that we were very lucky in this attack.   Rack will heal.  The skin was ripped open for a "thumb length" and you could see muscle and sinew underneath.  We got him to the veterenarian who remained open for this emergency.  Rack now has a bare patch on his leg with some stitches as well as him wearing a spare T-Shirt.   He's also sitting as close to me, physically, as he possibly can.

There have been pitbull attacks in Wilton Manors before where small dogs had their legs flayed open like a sleeve, and worse.  This is the reason for the law.  There are too many people in this city with dogs of all sizes that are badly trained.   While a Chihuahua with an attitude is bad enough, even comical, an aggressive pit bull is deadly.

To say "Keep your dog on a leash" is an understatement.  There is never any justification for this sort of situation.  Some people shouldn't own a stuffed animal let alone a deadly and vicious pit bull.  They make it harder for the rest of the people out there that are responsible owners.
Posted by Bill at 9:50 AM