Bromeliad Blooms and Other Blather 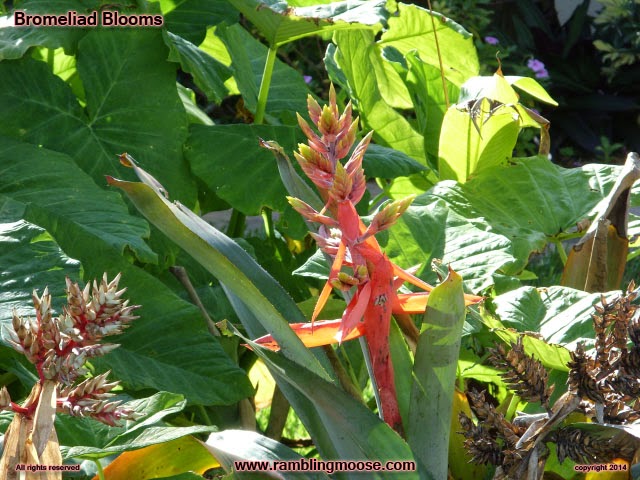 When things get too hectic, stop to smell the bromeliads.

I guess I need to pay attention, don't I?  It's a case of having too many things happen at once.

I'm in the middle of reloading the PC.  A whole laundry list of things have to be decided.  I'm in there with all the Windows XP "expats" at the moment making those decisions.

Whether to go with Windows 7 or Windows 8.1.  Why go with one over the other?  How to make one look like the other?

I went with Windows 8.1, and immediately got some spyware onto it.

If you install Windows 8.1 and don't want "Ugly Block Land" to get in the way of your efficiency, you will need to install Classic Shell.   It's freeware but it also comes with some nasty spyware that you have to be very careful NOT to install.  It isn't very clear when you are installing and if you don't pay attention you will be where I was, and get some spyware on it.  Immediately.

Windows update was running, for the second time, and all the sudden I got ads.   Now, anyone who knows me will tell you that I'm the fastest remote in the East.  When watching the TV, I have a 30 second skip button and I always, I mean ALWAYS watch TV via the DVR.

In other words, 30 minute shows last 21 minutes.   Commercials hit and I'm playing the skip button.  Someone tells me about this "great ad" they saw last night and I shrug and grunt.  "Iduhknow"

But Classic Shell will work for you and make Windows 8 and 8.1 look like Windows 7 while not removing your ability to play with ugly blocks in Microsoft's Ugly Block Land Interface.  That is if you don't get the ads on there.

It was then when I went to write about something else, my morning took a strange twist.

I didn't have a way to put text onto the picture I wanted to post.  Pretty Bromeliads, aren't they.   Windows 8.1 didn't want to install Photoshop, and I was getting frustrated.  Wanted some flowers.  Who does the computer guy ask when there's a problem on his computer.  Oooh More Bromeliads.  Photoshop installed?  Do we have "our" font?  Open the picture.  Ahhhh...

I'll get my fonts off of my server, they're all open source and free so if you're looking for something distinctive I can let you know what I used.

So I can commiserate with you.  You Windows XPats.  They tell you your computer is now open to all sorts of viruses.   Mine was upgraded and I had to go through the same thing.

Did you know the new Excel 2013 is butt ugly?   Purely flat and white?   You can change the white, but you have to find the thing that turns off the slide.

Yes.   When you move your cell from A1 to B1, it slides.   Someone at Microsoft needs to be slapped with a trout.   It is the Metroing and Creeping Smooth Scroll chaff that is coming everywhere.   You have a PC in your lap that could run the entire country of Jamaica's internal revenue service from the year 1983 and what does Microsoft do?   They make everything ugly, blocky, and slide-y.  It also takes some of your computer to make all that eye candy pop.  I really don't like that sort of thing.   Makes me impatient.

Windows 7 why did I forsake you?

Here's a Bromeliad to smooth your mood.  Let me type some nonsense in as a title, change the font to Gautami, add a pink stroke and some background glow.

There!  All Done!  Even if I did have to resort to installing Inkscape as a backup for today.

Now, where is my Photoshop CD?  I just might be able to finish that install.

I just don't see grandma figuring this stuff out.  But figure it out we will since this is the way things will go until Windows 9 happens in a couple months.   For now, just remember that Microsoft always needs three pitches to make a hit.  Four to make a home run.  Windows 8.1 is only Pitch Number two.  Windows 9, I am hoping, will be Pitch Number three.
Posted by Bill at 10:23 AM