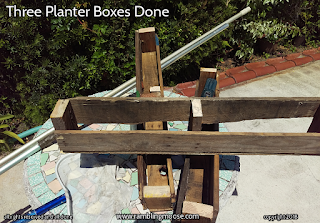 I guess you could say that this all started with Hurricane Irma.

We made it through fine.  The folks elsewhere had much more to deal with than we did here, because, we had been planning for it since we moved here in 2006.

However, we did learn in the two weeks power was out that we needed to upgrade our generator.

That generator has arrived and came on a pallet.

If you ever got something that came on a pallet, you also know that the pallets tend to stick 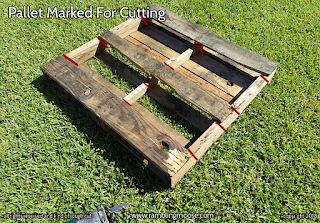 around for a while.  If you don't use the wood up, you have to chop it up and find a way to toss it out.

Being the creative type, I also know that the pallets are a great source of wood for projects.  Some are quite elaborate, some simple.

This Project Can Be Completed In An Hour.

I did say we were prepared. Those tools were rescued from people who don't realize that you can both replace the battery pack and you can retro fit the packs with fresh batteries.  So thanks to whoever it was that left them outside with a sign saying "Free to a good home" because yeah, I can fix that.

That pallet pictured is marked off where I cut the thing apart.  With 12 cuts into the wood itself, plus some extra cuts between the slats to remove them from the base, the whole thing was in pieces in about 15 minutes. 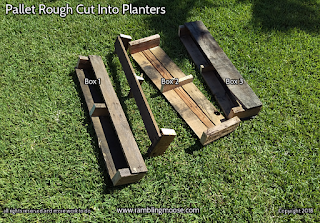 Then I took a few pictures to show my handywork.  The thing is that with the right tools, this is trivial.  The Sawsall is like an electrically powered hack saw that is a must have for a homeowner.  I used mine the other day to take down 7 palm trees in the yard, and while there are at least a dozen more that need to go, the tool is great for the job.

I'm still on the "first charge" of the battery pack after downing the trees and cutting up this pallet.

You will notice that I am not giving dimensions to this project, either.  Pallet wood is never very good.  Mine was brittle, and the pieces were there to hold a generator steady, not to be pretty for use in furniture or planter boxes.  The cuts have to be made as a Judgement Call.  You have to figure out for yourself where the cuts go.  You also have to determine for yourself whether you want to use a somewhat dangerous tool to cut through the nails that hold it all together - Standard Internet Warning Applies - Do This At Your Own Risk and Take Precautions to Keep Yourself Safe.

Or get Mommy or Daddy to do it.  I'm not taking responsibility for any damage or injury, you're an adult, figure out the tool use.

Ok, so I sound like your big brother.  I am someone's big brother, and my kid sister will tell you that I have my own way of teaching.

Boy did I open myself up there....

So once the rough cuts are done, you need pieces to reassemble these boxes into the end 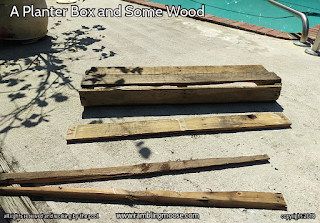 result.  The pallets are made with a semi-solid deck on one side, and three support beams in the bottom.  Those three support beams are where the cuts happen.  They are also going to be the easiest place to make your cuts since you already have four out of six sides of a box assembled for you.

Take some of the extra wood from the scattered pieces, and nail them in place.  The scattered pieces were in differing levels of usability - some were split before I got to them, others were quite solid and could be screwed into the thing to serve as a base.

I used the electric screwdriver and some "Drywall Screws" and it was done in short order.  Be sure to use enough screws to hold the boxes together.  I used two on each end of the plank, and two in the middle.

From what I can see, the only thing that will take these apart will be time, water, and termites.  They're sturdy enough to hold my weight, although you may not have that luck depending on wood, weight, and other variables.  In fact, forget I said it.  They don't have to be tested that thoroughly, don't go standing on it.

At any rate, the only other oddball thing I have been considering was to line these with some landscaper's cloth to hold soil in place while the boxes are hung on my fence in the yard.  That is not strictly necessary since I'm also considering using one or more of these to hold orchids.

But yes, I got these boxes done in under an hour.  Electric tools help.  Using a rip saw and #2 Phillips Screwdriver by hand would make this a rather painful process.   As is my right thumb got a blister from the Sawsall vibrations and I felt it the next day.

Just be careful.  I'd like you to visit again some day without thinking this fool gave me an idea that I did and I broke a nail or something else doing.