Walking The Dog and Eating Venus 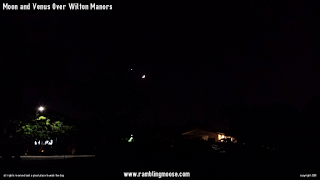 I've always tried to live a little "off peak".

Restaurants are a perfect example.  When I lived in Philadelphia, and worked in Center City, I knew that if I hit a restaurant at 12 Noon Exactly, I'd be there with dozens of other office workers all jockeying for that table and that choice burger and fries.

Rarely a burger, I prefer ethnic foods at any rate.

It even effects when I walk the dog.  Rack, The McNab SuperDog (TM) has a habit of greeting his friends, vigorously.

I don't mean a simple tail wag, but a full on, jumping shoulder high off the ground, wagging,

whining mess.  Then he sits down, dusting the pavement, and waiting to be told that he can visit.

I can tell who he considers his friends because if he passes you with a mellow attitude, he's either just seen you or he's cool on you.

So since I am up before the chickens, we walk before dawn.

I see some amazing sunrises as a result.  The quiet of the morning before you have had your shower, and I'm out walking in large lazy circles around my town is a nice cool time.  Me, Rack, a few joggers, and the parrots in the trees waking up. 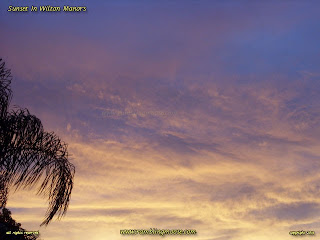 The evenings can be just as perfect.  Being smack dab in the middle of the 120 mile long by 15 mile wide suburban sprawl that is South Florida, there are not many things in the skies to watch.

The sun goes down, fading from gold to blue, blue to black, and the few stars come out.

The first thing I do when leaving the house is to look up at the skies.  It's a method of weather prediction, and a good way to make sure you don't smell like Wet Dog.  If it is summer, it is hot.  Winter is cool.  It never freezes, and if it was comfortable yesterday, it will be comfortable today in this Tropics Adjacent area.

It's July.  It is hot.  It will remain so until October.  We hit 99F/39C last week which is the hottest it has ever been that I have seen since moving here.

I once was sitting on the Art Museum Wall in Philadelphia listening to the news station there and heard them report that temperature.  I stood up, and got on my inline skates for another 9 miles shrugging that it's more comfortable to move at a slow pace than sit down on a hot granite wall
in boxer shorts. 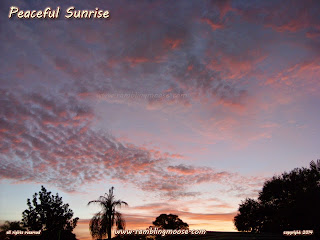 In comparison, England complains when it hits 76F, 24C.  I cool my house DOWN to that and if I skip breakfast, I'm cold by lunch and complaining about it.

So looking at the skies, that night it was perfectly clear.  No clouds at all.  There's usually one errant cloud somewhere looking like cotton candy but not that night.  Heading out East towards the beach, I looked over my left shoulder and saw what I thought was an airplane heading into Fort Lauderdale Airport.  The landing paths are East West here, and they tend to float just to the North of downtown.

But, it didn't move.

Mind you, I can spot Mars just about any given night, but this was white.  It stared at me like it was about to be eaten by a crescent moon.

We walked around town with a shrug, and I borrowed a nearby mailbox.  Sitting a camera on it, I grabbed a picture wondering what it was.  That Star being eaten by the Moon turned out to be Venus, setting over South Florida.

So when you take your dog out for a walk around town, look over your shoulder.  You never know if that airplane turns out to be a hungry satellite eating a planet. 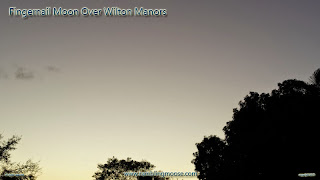