Skating with the Goodyear Blimp at the Pompano Airpark 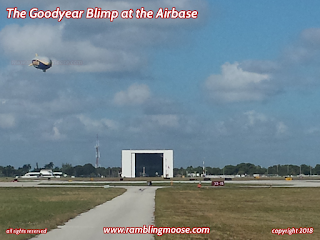 When they carved up the flat swampy ground and drained the soon to be populated area of South Florida, there was this large plot of land that was once out where nobody lived.

People eventually back-filled their lives into the area, there are homes surrounding the park in the large sprawl that is what is the metropolitan area.

Goodyear got there first and bought that plot before we all moved in.  They put in an airport, landing strip and the hangar for the Goodyear Blimp.  There are two that I know of, the other being in California.  San Diego I believe but I could be wrong.

It's more than a square mile of land serving light aircraft and the worlds largest flying billboard, the Goodyear Blimp.

When I was growing up in South Jersey, we only ever saw it once or twice so it was a curiosity.

Moving here, I have put that plot of land to my own uses, skating on the "black ice" trail that encircles the Hangar and the civil airport.

It is 4.6 miles around, if you are needing a place to skate here that you won't get hunted down by the ferocious drivers.

If Boston has the reputation where driving is a contact sport, they need to come down here and see how hunting down others is really done.

That is why I went back to the Airpark.  I had some moron from Townhouse Isles in Wilton Manors pass me on NE 7th Avenue more than once in an all fired rush to get out to whatever their lives had in store for them, and as a result nearly take my own life with them.

Trust me, don't skate or bike on the roads in South Florida, it's dangerous.  This coming from someone who has ridden a motorcycle in Manhattan, drives a Jeep Wrangler, and skates a lot.

But, the Airpark and its trail is safer.  Even if it is a bit short at 4.6 miles, and totally flat, you can get miles in.

I needed to get back skating because, while it is not fashionable, inline skating is probably the 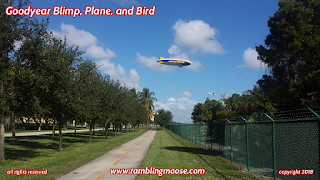 I did notice that when I started that workout, the blimp was practicing maneuvers, and that can be entertaining.  Once sitting on a bench near the end of the landing strip, I watched that giant cigar coming in for a landing at what looked close to a 45 degree angle.  In the wind.

Snapping a picture, I started skating around the trail.   The hangar sits at the midway point, 2 miles in, and there's a shaded portion at mile marker 1.  When I came out of the shaded portion, I noticed the blimp hanging overhead coming into the approach for landing, along with a small civil fixed aircraft.  At that same time, there was a bird heading into the view.  Most likely flushed out by the fans that push that blimp around, no doubt.

This was not going to be a fast workout.  I had for all intents and purposes, stopped skating a few years ago, rolled to a stop.  It was much more fun to skate with the team, and there just weren't any people around.

Life moved on and, Life is better on 8 or 10 wheels.  Someone else in the neighborhood knows that too because slowly more people started dusting off their skates and are skating around town.

By the time I got to where I wanted to turn around, after all this was a "Get Reacquainted" workout, I got to the back of the hangar.  I'm right around 2 to 2.5 miles anyway, and I wanted to see what was going on.

Well really, I was trying to skate at my old competition speeds and my fitness levels weren't up to cruising at 16 mph (4 minute mile) so I slowed to stop at the back of the Hangar. 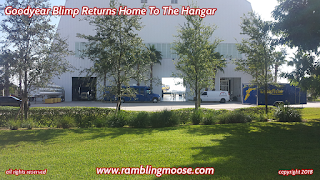 Sitting there on the ground, visible through the fence and the back door of the hangar was the blimp being stowed after a landing.

Cool!  Firing off a couple more pictures, I left with a grin.

I needed that pause.  While I did finish the lap plus a half mile, this workout told me I slacked too much, too long.

So Instead of doing my usual training workouts of 33 miles at a shot, yes, three times a week, I am doing a 5 mile loop, and starting over.

After all, you can't skate 100 miles in a week if you don't skate 5 first.  I'm back at a steady pace, skating the airpark and wearing out my wheels.