The Square Pot, Or How Eric's Planter is Becoming A Herb Farm

A while back, a local friend, Eric, gave me a bunch of planters. 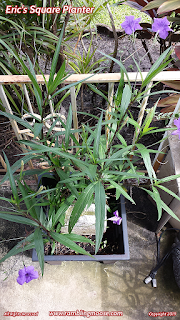 He was moving from his apartment only a few blocks away to another one a little further out.  That old place had a patio area where he could have his planters, and raised an interesting collection of flowers and milkweed.

I also got most of his milkweed and it's out in my backyard under various cover so that some gets eaten to sticks by hungry Monarch Butterflies, but not all of it.

He did have this one nicer planter.  It is a square on top, almost a cube.  He wanted it back once he landed and since I have the room, I was going to hang onto it for him when he came calling for it.

I did wait a while, but he never asked for it back after settling in.

Typical to my own quirky behavior, if I have a spare planter, it will get used. 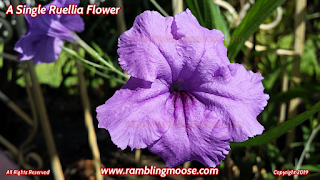 I moved it out to my front porch and clipped a few cuttings off my Ruellia.  I have rather a lot of Ruellia, and it does spread somewhat, so there's a small background noise of me cutting plants and debating Throw Or Cut.

This was one of those days.  Smiling I said "Lets make a planter for Eric".

Ruellia Cuttings will mope and look dead or dying for a month but almost always snap back alive with generous watering.  Just snip the cutting below a knuckle where the leaves come out and you're golden.  The Ruellia was only planted on one half of the planter and I was going to put something else in there.

Mind you, I wandered out there looking over the pot a morning later and was having breakfast.  Some Canteloupe with seeds fell out of the bowl and landed in a corner.  Weirdly, the Canteloupe sprouted.

I really have no idea if I will manage to get anything out of the Canteloupe but this weird little garden will be in that spot for a while.   If the vines do grow up and out of the pot, I can let them grow into my garden in front of it.

The other day I contacted Eric and told him this story and he generously told me to keep it as he doesn't have space.

It's taken root here I guess, purple flowers blooming every single day and the Basil that was meant to go into someone else's tomato sauce will go into mine.

So Thanks, Eric, I'm out to put more cuttings in that pot.
Posted by Bill at 9:13 AM