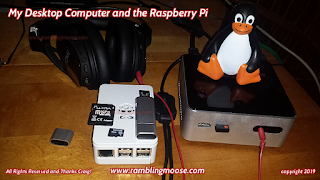 Basically, I came to the conclusion that I needed to use my Linux Desktop to do a clone of my Raspberry Pi.  Windows has different tools, Mac has some of the same tools and I believe dd is available under terminal.

I'm not a Mac or Windows Guy, I use Debian Linux, exclusively.

The lay of the land is

So you have a credit card sized computer.  The little computer that could.

You decided to do some things to it and perhaps got your feet wet using Linux.

Good for you.  That's one good use for a Raspberry Pi.

It's a machine that is best used for learning.  Doing weird projects like you see all over the place.

I have the second "use case" for it here.  It's a great Print Server.  I turn it on, my Linux desktop sees it, and I can print to it.

All that requires some customization of the machine, installing CUPS, maybe some other things like using it as a small data server with SAMBA.

You got your machine stable but did you back it up?

After all, if you're playing with RTL-SDR and want to look at some amateur radio using the Pi to serve the radio out from where the antenna is, it will take more customization that you won't want to lose.

Ok, so since the Raspberry Pi can run off a couple rechargeable batteries or a wall wart, it's getting put out in the shed and is now nice and stable but the second situation comes to mind for backing it up.

Debian and Raspbian will be upgraded to the next version "very soon".  There's no rush for that, the old stable will be maintained for a few years, I mean Linux isn't managed like Windows is, is it?

Even though the next version, Testing, is stable enough to use as a daily driver like I do, you really do want to back that machine before you upgrade in case you do it wrong.

One final reason to back up is that the Raspberry Pi occasionally corrupts the litlle SDHC chip that has the Operating System on it due to static electricity, power pops and so forth.  That is how the hardware is constructed, you can't avoid power instability without filters or battery backups.

Here is how I do a backup, and when I am done, I have an .ISO file that I can write out to a different chip.

Really that is it.  Just issue that command, walk away.  It took about an hour for me to do this al, plenty of time to do something else.

Or just go have a coffee.

When it is complete you will have your backup ISO and you can copy that back out to a chip or just leave the file on your hard disc as an archive.

The restore is the same dd command with the if and of parameters swapped: