Be Prepared and Wrap Your Wallet In Plastic 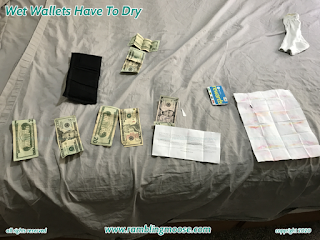 I end up with "projects".   Some of them are even finished!

Having had an entire day shot because the winds were up, too high to skate, followed by the same thing the next day, I've been chewing through projects.

Since we are all burned out on what the election will bring, that's a project I personally finished back in October.  Less said about all that the better, however I didn't want to get too far from the house that day.

Can't skate today either, and with "base winds over 20, and gusts over 30" for the second day in a row, I'll wait.

But that skating thing.  See, when I was in Philadelphia, I called myself an elite skater.  100 miles a week (162 KM) from April to October.  It changed the way you look at things.

I was constantly either skating or preparing for it.  Weightlifting five days a week in a University Gym.  Nice thing about skating a 33 mile workout was that that piece of chocolate cake you eyed on the neighbor's table walking into the restaurant would be a necessity and not a maybe or a cheat.

When I explained that to a dear friend who was a Restaurateur, she smiled and brought my big slab of cake that one night with extra whipped cream on top!

Here I'm purposely holding my distance down until covid is over and life gets back to normal, whatever that may be.

Two times ago I went out for a workout and it was strange.

We had high winds the night before, and I was able to get out to the park.  Any times we have winds in South Florida, it can be anything over 20 MPH (Call it 30 KPH).  Expect tree limbs and seeds and general "mulch" blown onto an asphalt sidewalk about three times wider than my shoulders are at average.  Not much room to move to avoid an emergency.

Emergencies happen when your wheels are almost rock hard and you hit a stick, trust me!

I had decided to go out and enjoy it anyway.  But I wanted to inspect the skates.  If you are out and about, you have to prepare and bring with you two bottles of water (one liter) and more in the car since if you are at a park and there is a water fountain, understand that at night when you are snug in your bed, the water is still there.

It becomes a shower for the homeless.  You decide.  I'll carry my own, thanks.

I bent down and put each skate on my opposite leg, checked that the bolts were tight, and went on my way.

No problems, I hold my bolts in place with a small snip of duct tape so I can pull them apart easily.

Going on my way I noticed that I was wet.  Granted, at my level, about 25-30 calories burned in a minute on average, I expect to be wet, sweat is normal.

This wasn't warm, though.  I was getting cold water draining out of the fanny pack that I wear backwards so I can reach it easily.

What happened is that I hadn't tightened the bottles enough and water leaked out and soaked everything.  The tools were not a problem, they've gotten wet before.

While moving, I unzipped the pack and looked at the bottles.   I lost about a quarter of the water in both bottles, so call it about a half of a soda can of ice water got sprayed.

Into my wallet it soaked.  Fabric wallet.  Where the money and the car insurance and registration was.

Yep.  All 7 feet of me with gear was dripping water onto my cotton shorts where it looked like I had An Accident.

Shrug.  No accident, just not prepared quite right.

So the solution is this time the wallet, the tools, and the surgical tape I carry will be wrapped up.

On top of it all, I had to hide under a big mango tree at Kevin's Bench near the Goodyear Blimp Base when another gullywasher of a thunderstorm fired up.  Sit it out, it's two miles to home, and you have work to do later to dry everything out!

But.  On the way out to the park the last time I got a curious look when I pulled a wallet out of a plastic bag that was shoved in my pack.  Looming over the counter, I got out the cash and said "40 on pump 6 please!", got on my way.

Repeat the whole thing when I went to get the 10 back in change in a few.

So be prepared, but remember, if you are on a workout, you still have to interact with people.  Make sure your money stays dry, nobody wants wet twenties even if it is only ice water.

It had dried!  Trust me, I swear it was dry!