The Ginger Flower That Jumped Out To Have It's Picture Taken 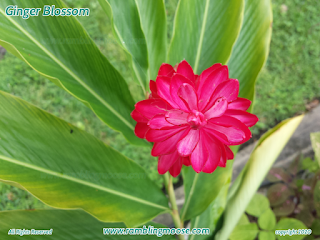 I have quite a lot of this ornamental Ginger.  I don't believe that it is edible, even if I don't spray pesticides on it.

I have a small bit of the ginger from the market growing slowly in the front garden.  Actually the slowly is the most important part of that phrase since it is not doing enough to be worth keeping in the spot.

This stuff was given to me by the neighbor when he had to pull it out of its planter box.  It has a nasty habit of being a bit vigorous in a garden.

For now it's out by the shed, growing under the orchids in semi shade.  I have to trim it regularly since it's grown eye level through the orchid pots.

This particular piece had sprouted that bloom and I meant to get a picture of it.  First the wind moved it, then not enough light, then ... well you get the idea.

I tried One Last Time for a photo and even that one wasn't good.  Too bad because right after I took that picture I had cut the stem from the plant and meant to throw it away.

Weirdly it was out in the yard where I left it earlier, red-pink bloom saying "Picture Please!" so I stuck it in a pot and fired off this one.

Funny how that can happen, right?