With electronics that are "User Serviceable" sometimes things come loose.  That is what happened with my phone.  The result of my own following this process is that it's working fairly normally for an 8 year old phone that goes through some serious abuse.

I was given a Samsung Galaxy S4 about 7 years ago.  This cellphone was amazing, flexible
and still reasonably fast to this day.  Thanks, Craig! 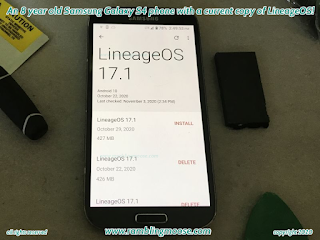 The original Operating System stopped being supported by Samsung almost immediately, and about 3 years or so, apps were not supporting the version of the OS that came with it.  The solution was to unlock, root, and install LineageOS on it.

The short story here is that I have a 8 year old (2013) era cellphone with an operating system that is being actively supported and is a week old as of this day's writing.

That is important because Google is no longer going to support the certificates that are necessary to use the phone on the web.

Lineage, with a rooted and unlocked phone will fix that.

It began developing problems when it hit the pavement on an inline skating accident.

It lost the ability to sense where my face was (Proximity Sensor), the USB port was disconnecting from my computer, and later the S4 was reporting that there was no SIM in the phone.

There is a simple test, and since the hardware is easy to diagnose, I have replaced all three pieces with new.

This phone is built like a desktop computer with cards that plug into sockets.

That test is to open the case of the phone, and re-seat each connector for the daughter cards onto the motherboard and see if that helps.

It may not, or it may completely solve the problem.

The connectors are easy to spot on the S4, and even on the S5 and earlier you may have luck following this procedure.

Your Mileage May Vary and the Standard Internet Warranty Applies:

Ramblingmoose.com takes no responsibility for any repairs that you may attempt or fail to complete.  While I make my best effort to make sure that the information presented here is complete and accurate, it is at your own risk.

You can find the parts, if they are in stock, on Amazon and other locations.  The phone itself is available on Ebay running about $20-50 a piece if you catch the right auction.

I personally may grab one, while it is an 8 year old phone, this thing purrs like a kitten.

The basic procedure is simple:

Power off the phone, perform a full shutdown.

Remove your phone from the case you put it in.

Pry the back off the phone and set it aside.

(Remember when you could do all that and not have to have some so-called genius do that for you?)

Remove all nine screws from the back of the phone. 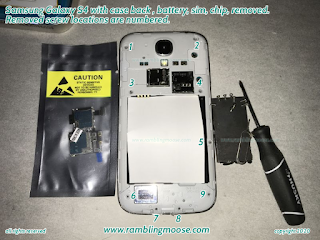 Separate the grey plastic speaker assembly and larger "mid frame" from the phone by separating them with a Spudger or a Guitar Pick.  Do not use metal or a screwdriver, you will have a bad time as it can be too aggressive and may break some components. 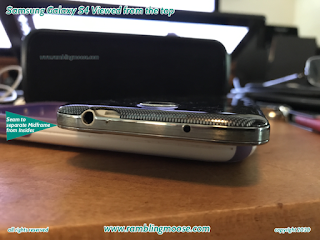 Locate the grey rectangular connectors highlighted on the picture below and push GENTLY to reseat them in the sockets on the motherboard.   (Remember, at your own risk?  This is where you have to be careful.) 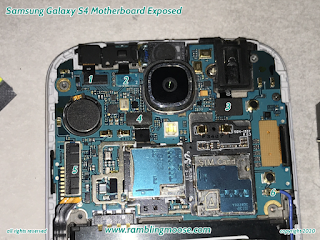 The numbers are as follows:
1 and 2 are the Proximity Sensor and Earspeaker not sure of order since it is a small board with the two components.

3 Honestly... not certain.  Check to make sure it's seated.

6 One end of the Antenna Wire

If the camera is dead, that can be accessed by removing the two screws that hold down the motherboard and re-seating it from behind.

A Full Disassembly of that order is beyond the scope of this article. 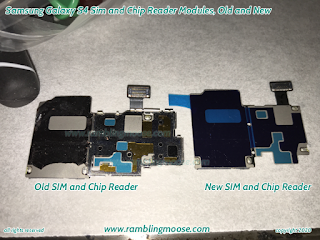 To Remove the SIM and Memory Chip daughter board, use that Guitar Pick.  Disconnect the SIM and Chip Reader board from the motherboard.  Pry from the memory chip side, gently but firmly.  Continue working your way toward your right where the SIM is.  The usual procedure is to use a Heat Gun or Hairdryer to loosen the adhesive to make the socket assembly peel off the board easier, however mine was old enough that I could get the board off with some insistent pressure. 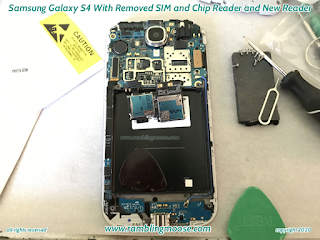 Once removed, connect the SIM and Chip daughter board at the socket on the motherboard, peel the blue tab off the back to expose the black sticky adhesive and carefully align the assembly on the board where the old one was.   Press down to join the adhesive and board to the motherboard - remember that the adhesive is intended to go one way and if it is not set in the right place, you may have problems.