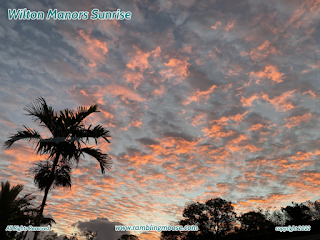 Every morning routine differs.  Mine is changing lately.

This particular day I had gotten to a point, well before dawn, that I decided to wrestle with a virtual owl and practice Spanish.   Nothing out of the ordinary there, I've been doing that for about nine years now.  I can read it, write it, and listen to Spanish language media frequently.

In the Covid Era, going out to a mall to practice  is not something that I plan on doing, but I will say sitting in a chair in a waiting room yesterday brought out an observation.  There was an older Spanish Speaking couple next to me chattering quietly back and forth and I thought it would be fortunate that they don't actually understand the TV on the front wall with the Morning Chuckle-heads of Choice playing because they wouldn't have to be assaulted by the drivel.

... But yes, of course, listen in, I did.  It is South Florida after all, and just because the big guy sitting next to you in a chili pepper "Hawaiian" shirt is an Anglo, it doesn't mean he can't follow you.  It just means he's lost in thought and in his own world.   Go on Abuelo y Abuela, live your best life even if you said that the TV was stupid.

Sitting in the chair, I am debating what to do to be active.  There are only so many things you can do when the sun has yet to crack the sky open.  However, people were doing that, going out and walking dogs is usually the first thing that I spot.  A Neighbor walks past seeing my laptop's glow and looks away sheepishly.

Then the Joggers start.  There is nothing odd about that, the traffic levels here are low enough in the morning that my specific block gets a lot of people enjoying a little morning cardio burn.  I've done that myself quite a few times.  I am way too physically active to want to sit in that same chair, still forever, and prefer to enjoy my own burn.

However, this particular morning, it was a new Jogger.  At least that was what I thought he was doing.  Wrapped in brightly colored "Tech" fabrics, he came around the corner from the South.  I spotted him and then made it a point to watch.  Flailing his arms like one of those fan powered arm waving displays, he stopped.  Or rather he paused in front of my mailbox bouncing around as much as he could without actually going anywhere.

In a flash of activity, he presented a phone then looked up at the sky and snapped a picture.

Just like that he was gone.   It was like a fireball of activity had appeared then ran off.   Flapping arms as he went.

It did raise my curiosity and I am glad I got up out of the chair and looked.   One of the more beautiful sunrise cloud displays I have seen in quite a while.

And way down the street, just at the corner turning out of sight, was this jogger.  Still flailing his arms, he was gone.

This is the kind of place where the middle aged redneck down the block might be using a skateboard to get to where he would want to go, or your dawn jogger might be flailing their arms wildly, but I have to admit, that kind of quirkiness is why I live here.

One Morning's Sunrise is Beautiful.  Just like the day before or the day after.  Beauty is all around you, just look.