Could This Be Blue Crab Season? In Wilton Manors? In Front of my House? 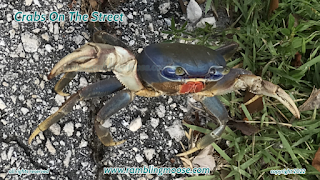 Too much of my life ends up happening on a workout.

I have managed to cobble together a rather aggressive schedule of distance cardio activities, and all that endurance training takes a lot of time.

This was getting ready for the bike workout.

Step outside.  Comment on the steam bath that is late spring in South Florida.  Remind myself that it's already hotter Up North in Atlanta or Philly.

By the time I make it to the front yard, turn on all the electronic nonsense, and saddle up, I have killed five mosquitoes.

As I am looking to start Runkeeper and be told "I'm Proud Of You!", I spot something in the middle of the street.  From that distance, I thought it was a leaf, but it moved strangely.

*shrug* May as well go look.

It turned out to be a little blue shelled crab.  "Awww, I've had your cousins before and they're tasty!"

I made it a point to put the camera a little too close for comfort to get this little creature, I'll call him Dr. Zoidberg, to move onto the grass and out of the traffic lane.

The park I have been skating at has herds of Green Iguanas running all over the place.  It's like raptors in Jurassic Park.

After the big rains we had last week, we have clouds of mosquitoes, obviously.  But we also had herds of crabs scuttling across the road bed like I had been magically transported to Australia.

That part of the park also smelled like a really bad seafood restaurant that needed the department of health to close it down.  After all, in the battle of Crab vs Car, Car wins.

At least the buzzards and the herons did not mind picking up the mess.

Just watch when you're on your skates at speed.  Look big!  They scuttle away.

Since it's a park next to water, Mills Pond Park, there's always the possibility of larger water creatures deciding to take a snack on you.

I have never seen an alligator at that park, but I do remember visiting a different park in Dania Beach once.  I had to run with the dog off the dock because there was a gator getting a bit too close.

So when we say it's Tourist Season here... ask how it's being defined.  You may get a different answer!