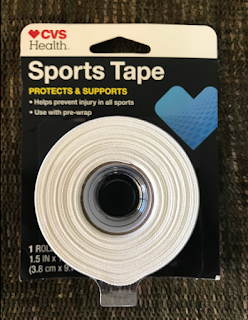 Like all Blog postings, this is my opinion.  Take it at its face value.  I may be full of garbage and misinformation, but I don't think so.  I am certainly glossing over the details as I am just too annoyed to dig too deeply.  Your Standard Internet Warranty Applies.  Your mileage may vary.

So at one point Apple made the decision to use a newer protocol.

This is not a new story, they keep doing that and they get their hands slapped by the Europeans.  It creates E-Waste and forces people to bend to their will by getting a new i-Thing.

Remember when all i-Things had that wide connector?  Go to any thrift store and you will be able to find, most likely, all sorts of iPod Docks and electronics that sold for upwards of hundreds of dollars when new for under $10

I guess my own Open Source mindset does not fit with their Proprietary mindset.

This may read like an episode of James Burke's Connections, a fine TV show in its own right, and I highly recommend it even if it is 1970s era color.

You see I have inline skates.  In fact I am under 100 miles of a career total of 24,000 miles.  My goal is at least 25,000 miles because that is the distance of the equator plus a comfortable margin.

With that sort of distance, I measure my skates in seasons and multiple thousands of miles.  If I can't get at least 3 years out of them, I consider them junk and get new from another brand.  I tend to get Rollerblade Brand skates.  I have been on their skates since the early 2000s.

No, I am not sponsored any longer but if someone wanted to get me to review skates, I am certainly capable of putting out an unbiased review.

Blatant begging aside, Skates tend to be expensive if you are using them as a recreational sport instead of pro or semi-pro as I was.  There's that whole debate between Soft and Hard Boot for distance skaters and I learned early that the reason why a Soft Boot is only $100 where a Hard Boot of any quality starts at $200 and doesn't get really good until you hit a minimum of $300, as a rule of thumb.

I will wear through a Soft Boot skate in about a season or between 1000 and 2000 miles.   Same with a Skate Liner inside of a Hard Boot but I can replace a Liner for about $100 in the secondary markets.

Since I had a credit at a skate shop the last time I wore down my liner, it made it cheaper to go with a new RB Cruiser.  My net was under $50.  YOINK!  I'm not competing against anyone or anything but "yesterday" so why not go with something a little less spendy.

I am down to one hot spot.

New Skate has Hot Spot.  Last workout I raised a blister on the tip of the right ankle.

That means I need Sports Tape.  This is a tape that is easy to find and commonplace in many sports.  If you move your body against anything abrasive, you will eventually get a blister if there is slop.  Put the tape against you and it gives you a thick skin.

The Tape is in the back of the Drug Store as well as online.  "Sports Tape" or "Athletic Tape" is seen most normally in a Football Trainer's Room or Boxing Ring.

But for me it was a mile away at the store so I had to get in the car. 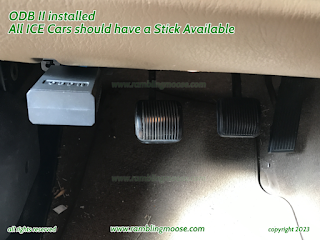 Someone at one point had to build the Jeep but that's a much different level of connections.

Since the last time back from the Park I noticed that it was being a typical Jeep and threw a Check Engine Light.  Many Jeepers will fix that by covering it by a bit of electrical tape, but my own New Jersey German Italian heritage demands I find out why instead of hiding it. 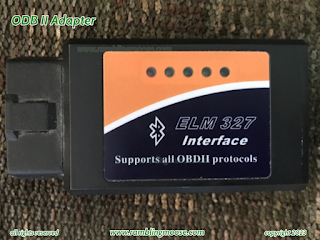 The perfect use for the ODB II adapter.  Plug it in, sync it with the phone, it gives you the reason.

No.  Apple I hate you.  You changed the spec on the current phones and it broke my ODB 2.  I have to either get a new Low Power adapter or find the older phone the software is installed on and that should sync.

See, Apple ticked me off.  That is the connection. The end result is I have to spend more money.  Bad. Apple is breaking compatibility. 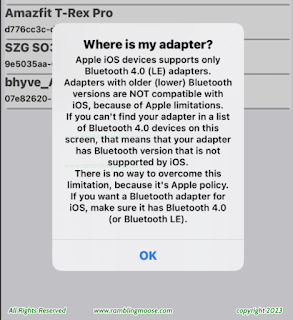 Apple's walled garden is why I love Linux.  Oh sure, Mac OS is shiny and based on a bastardized version of BSD which is a cousin of Linux, but it is just that weird OS that promises to be more secure but ends up being weird and while promising that it is more secure, the Europeans have found that the derivative that became iOS in your shiny little iPhone is phoning home information whether or not you tell it not to.

GAH! I hate Apple Products.  I use them because I get them as cast-offs.

Don't even get me started about how when you open one up to replace the battery it mucks up the GPS so that you now go from a 1% or less error over a 2 hour workout to a 10% error over 15 miles.

Yeah, no thanks.  Even if I can go to a Mall (remember those?) and have a "Professional" at the "Apple Store" replace the battery for an ever increasing fee.

Please don't miss my typed in sneer, it's there.

When I got into my car here at the house, I looked it up.  If you are getting your OBD II adapter, they now specifically say for Android vs Android and IOS.  As the picture above says, make sure that it is at least compatible with Bluetooth 4.0 or newer.

There's your connection.  Apple Broke it.

Sure, the adapter is only $12 but now, instead of having the reason why the Check Engine Light glowing amber on my dash, I have to wait until I get a new ODB reader.

Bite Me Apple, you're Rotten.