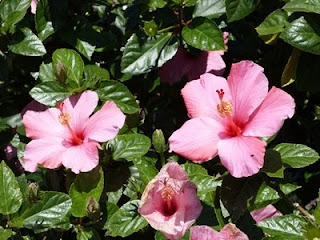 If you are going to post pictures of a land named after Flowers, this sort of flower would be the one to post.

When I was a Snowbird, I saw the Hibiscus hedges all over the place here and thought it was wonderful.  I didn't realize that they were considered an exotic species.  On the other hand since they don't tend to seed and propagate easily, they aren't a very threatening one.

I had one all through the 80s and 90s in my homes in Philadelphia, and it only died just before I moved down to South Florida.   White Fly took it out.   Or rather my trying to clean out the infestation did because I didn't like having clouds of insects in my house.

I went through a lot of trials to keep that thing alive in Philadelphia.  Every winter, I'd move it into the warmest window of the house and hope that it was enough light for it.   There was, but it was heroic efforts that kept it alive.

Here I have a yellow Hibiscus that is coming back from the iguanas, and these particular pink ones are at a shopping center very close to my home.   Walking around the neighborhood, I get to see a lot of this sort of thing.  Rather nice to have the privilege to be around this sort of beauty.
Posted by Bill at 8:00 AM