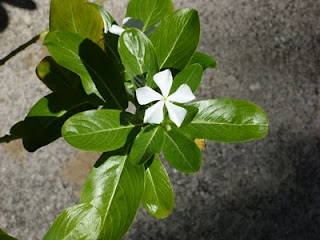 At least I think it is a Vinca.  That is what I was told.  I don't think it agrees with Wikipedia though since it looks nothing like their picture.

At any rate, when you live in a place that is named after Flowers, you get used to seeing a lot of them.  These particular plants are somewhat invasive but since they're easy to grow and pretty when they are in bloom I decided that I wanted to put a few in a pot.

A weed that looks nice.  Well, this is Florida, right?
Posted by Bill at 8:00 AM